"Personally, I can't wait to go back to working in the office" 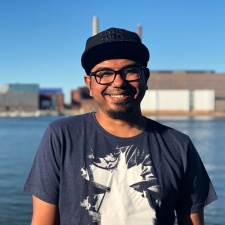 Ayushman Datta Gupta: Currently, I am the game designer and puzzle designer for Hay Day Pop, which is in beta in about 10 countries. My role entails working on the game design of Hay Day Pop, including the economy, and tweaking a lot of the game based off the feedback we are getting from our player base.

The majority of my time is also spent making most of the puzzles that go into the game. Here at Supercell we really believe in small teams, so it's a very full plate for me at the moment, since I'm the only designer on the team.

It doesn't really matter if you have a college degree, as long as you really know your stuff.

My career in video games began right out of college in 2007, when I became a part-time game tester at a Gameloft studio in Pune, India. The studio was then acquired by Ubisoft the next year, and overnight we became part of the Ubisoft family.

I then eventually transitioned internally to a game design position, and have worked on games for the Nintendo DS, Facebook games, as well as mobile games in more recent years.

In early 2018, I joined Supercell and moved to Finland as a game designer for Boom Beach. I worked on the game for about a year and a half, before moving to my current role in Hay Day Pop.

Personally, I've been always been an avid gamer since I was little kid - right from the Atari, NES and MSDOS era. Since then, I've always wanted to work in game development and I'm eternally grateful to the universe for letting me follow my dreams.

I have a bachelors in what we call 'Computer Science' back home in India, which is essentially coding. My day-to-day work requires no coding, but I think to be a good designer you must understand code and be able to communicate with programmers on their turf. This helps to find meaningful solutions to technical loopholes and problems.

In more recent times, there have been many courses specific to game design, although I am not familiar with their course material. My advice for aspiring professionals is to pick a discipline and learn as much as you can about it. Game development has a very broad scope, with many specific roles, like server engineers, animators, front end coders, VFX artists, etcetera.

Pick what excites you the most and learn everything you can, from anywhere you can. It doesn't really matter if you have a college degree, as long as you really know your stuff.

One of the biggest misconceptions I think I have encountered personally is that everyone is of the opinion that game developers simply "play games all day". This is absolutely not true (unless maybe if you're a tester). Yes, most of us spend a lot of our free time playing games, but that's just because most of us are heavy gamers at heart.

This is a profession where everything takes a lot of time and patience. Most games take years to build, and only after that do you know if what you have is a success or not.

I have personally spent a total of just over four years of my 12-plus year career on various projects that didn't quite make it to launch, with each being cancelled at various stages of development. You have to treat every project as a learning experience, and put in the time required.

I have been extremely lucky as my team has adapted to working from home very well. One major difference is that I have to be more mindful of communicating with everyone on the team since we are no longer in the same room together. This results in a lot more time spent in discussions via voice calls, but it is crucial to make sure the whole team is on the same page and working towards a common goal.

I try to maintain a similar schedule. The whole team is online at 10am every day for a quick catch-up over voice chats, and then we break off and everyone gets to work. I take my regular lunch break, and I go for a nice long walk at some point in the day as well. It's really helpful to step out for a while, especially with the lovely weather Finland has been having for the last few weeks.

I also find having a shower in the morning before sitting down to work to be very crucial. It's very easy to lose focus and get complacent. I feel that affects your work as well, so that's a slippery slope.

For me, the biggest advantage is when I get a random idea at an odd time, I can just go and start working on it since now I have my workstation at home. Earlier, I would spend some time making notes and/or sketches and then would have to wait until the next day.

The biggest disadvantage is communication. A lot of our greatest ideas come from casual discussions over lunch and such, which we miss out on when we work from home. We really had to step up our voice chat game as a team to tackle this problem.

If I had known I would be working from home for such a long duration I would have gotten myself a more comfortable chair. Jokes aside, it was quite a sudden thing, and we just had to adapt as we went along.

Keep a daily routine, make sure you get enough sunshine, communicate more than required with your co-workers, and make sure your workstation at home is functional and comfortable.

Personally, I can't wait to go back to working in the office but I do see how I could work from home a couple of days of the week. However, game development is such a team activity, since everyone’s working together on the same thing, with a lot of inter-dependencies. The benefits of being in a room together outweigh pretty much everything else.