"I've always wanted to make games, but I guess you could say I got started via the scenic route" 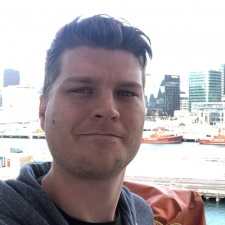 Matt Purchase is the solo developer at Anchorite Games

Matt Purchase: I've always wanted to make games, but I guess you could say I got started via the scenic route. After I finished school in 2006, I had some experience with digital painting and decided to try my hand as a concept artist. I went to art school and learned all about the why of art, then went to a games college and learned the how of 3D plus animation.

I only work one day a week on Anchorite stuff; the rest of the time I work a day job making apps and websites for a digital agency

Following this, I spent a couple of years working with some smaller game studios and saw what production actually looked like. I was lucky enough that someone offered to teach me the basics of code, which helped me to learn Unity and C#. After all that, I finally started considering doing the indie thing, but almost completely solo. I picked up some tips on sound design and went ahead to build Unstoppable.

I only work one day a week on Anchorite stuff; the rest of the time I work a day job making apps and websites for a digital agency. So, on that one day, I'll walk a couple of steps from my bed to my home office. I always try to keep a plan of what my next indie day looks like well ahead of time, so I'll have a list of tasks to do on Trello (which you can see linked in Interloper!) and I'll just try to work through them.

The hardest part is undoubtedly stopping work. There have been days where I start at 6am and finish at one or two in the morning the next day. It really doesn't matter how much you love what you're doing (and oh boy have I loved making Interloper), you've got to give yourself time away from work.

Honestly? Time. As I mentioned, I work one day a week on this, as a way to de-risk the whole venture, but that really leaves me with so little time to get meaningful progress on the game. This has been especially true since the game has launched. I'd love to get to the point where I can work on this stuff full-time, but until then I just have to make do.

Kind of a flip side to the previous question because I work a day job, it means that Interloper didn't really need to make it big financially. Sure, I've got a sales target, but if it didn't make it then so be it.

The main definition of success with that in mind is critical and audience reception. The game's original thesis was that I could build a space combat sim on mobile at a premium price-point and that there would be an audience for that. I think by that definition: Interloper is a success.

I'll preface this by saying that I've always seen Anchorite as being a premium game developer. It's really just the way I personally prefer to consume games.

That said, there's a ton of cool things happening in mobile right now, Apple Arcade is taking some interesting risks on games that are absolutely beautiful - if not guaranteed hits. Epic has its mega-grants and there does seem to be a bit of a resurgence in the premium mobile game scene.

It's just that in order to make free-to-play effective from a business perspective, you need it to be a core component of the game's design

Could you tell us about Interloper and why the game felt right for mobile?

On the other hand, at about two weeks into development, I had basic movement sorted, added haptics on top of screen shake as well as beefy sound effects. At that point, I knew this game felt just right.

I didn't really have to think about it. As I mentioned before, Anchorite has and always will release premium games.

That's not to discredit free-to-play games as that model can be done in a way where you respect your audience, with a vast quantity of iOS titles doing this. It's just that in order to make free-to-play effective from a business perspective, you need it to be a core component of the game's design, something I'm personally not willing to do.

I've been incredibly fortunate in that I've been able to work from home for my day job during the pandemic, so outside of the odd day where I would have worked from a cafe, there's really been nothing different.

For the foreseeable future, it's more content, patches, and free expansions for Interloper. How long this goes for really does come down to a question of time again. As in, how long can I sustain the current setup for working on the game? Hopefully, quite a while.

For the game itself, well, there's a revamp to the current bad tutorial that's coming soon (if it's not already out by the time this article goes up). Then it's on to finishing up the port of the game tvOS and macOS. After that, I'll look at doing the first big content drop along with an array of improvements to controls.

Interloper. Unstoppable. Probably the five or so other games I've got designs for that are worth releasing. The reality is that unlimited budgets come with unlimited stress. A big part of what makes Anchorite so special for me is that I can build these small, high-quality experiences mostly stress-free.

That said, if money wasn't a problem then I wouldn't charge for the games. I'd probably also hire a small team to help with things like QA and localisation.

My one bit of advice would be: If you can, don't put all your eggs in one basket, don't burn your savings building the dream game. It's a marathon, not a sprint. Find a way to do it that's sustainable, and if that's not possible right now, work towards it.