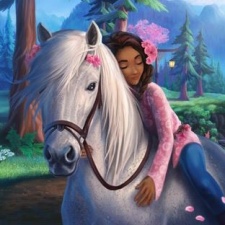 In one key respect, Star Stable Online’s expansion from games into books, animation and music is a return to source.

Back in 2005, the first free games in what was then called the Starshine Legacy series were created to improve retention for a horse-centric book club from Norwegian publisher Stabenfeld.

Over time, these became PC-based MMOG Star Stable Online, which itself has expanded into various companion mobile apps, with a mobile version of the full MMOG now in soft launch testing.

"We always wanted to make a deep, high-quality product for girls around the beloved theme of horses," recalls CEO Johan Sjöberg.

"That was the audience we knew we wanted to address.

"We knew it was an extremely underserved audience. We didn’t realise just how big an audience it would become."

"It’s a game with a nice life cycle," he agrees.

"It particularly serves families well, whether that’s mothers and daughters, or sisters, cousins and aunties."

Part of this behaviour is down to the attitude of the developers, who despite the subject matter, always wanted to make a proper MMOG, including guilds (here called clubs) based around the love of horses and riding in an open world.

We always wanted to make a deep, high-quality product for girls around the beloved theme of horses.

"Back then the attitude was don’t make an MMOG, it will cost $50 million. Don’t make it subscription-based, and definitely don’t make it for kids," jokes Sjöberg.

"It didn’t cost us $50 million: we only had 10 developers. But we’ve spent 10 years continuously building the team and product."

Indeed, Star Stable Entertainment, which is part of the Nordisk Games portfolio, now consists of 175 staff based in Stockholm, Sweden.

Significantly, another early decision that has paid off was the frequency of content drops.

"In 2011, we committed to weekly updates, whether new horses, gears, quests or races," Sjöberg explains.

The result is an enormous experience with over 300 hours of core narrative arc; something that supports its subscription monetisation model, although IAPs are an increasing element for players who want more paid content than their monthly free allowance of in-game coins enables.

As for its recent cross-media push - the Soul Riders books, Mistfall animation series etc - Sjöberg says it’s as much a way of keeping players interacting with Star Stable content outside of the game as attracting new players.

“We want to connect with our players wherever they are, especially when they don’t have the time required to spend in an MMOG session,” he says.

It also provides an opportunity for fans to engage with characters and plot in different ways.

"MMOGs aren’t great for deep characters or dealing with complex matters as you can do with books," Sjöberg explains.

Unsurprisingly, given its roots, literacy has always been a focus for the company.

The launch of the Star Stable: Mistfall animations on YouTube was always about expanding the game lore, and attracting a wider audience; something demonstrated by the series’ 11 million views to date.

More surprising perhaps has been the success of the Star Stable’s move into music; exclusively female talent. Of particular interest has been the rise of Nomi, one of the game’s artists who ended up providing the animated series’ soundtrack.

"With a focus on strong female characters, we want to inspire our audience to achieve their dreams," he says.

You can find out more about Star Stable via its website and check out the music via Spotify or Apple Music.