"We hit our all-time daily active user record just a few months ago!" 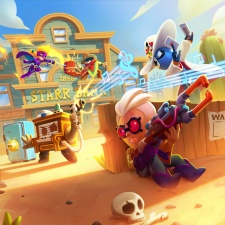 Frank Keienburg is the game lead on Brawl Stars at Supercell

That leads us to our semi-regular Live and Kicking series, where this week we spoke to Supercell game lead Frank Keienburg regarding the four-year anniversary of Brawl Stars and how it became a $1 billion success.

PocketGamer.biz: With Brawl Stars now more than four-year-old, how do you reflect on its performance as a series – from launch to the title it is now?

Frank Keienburg: The game changed a lot over the years. It was very hard to predict the global performance for Brawl Stars. Looking back now we had a very successful launch - especially for a new IP.

Growing the audiences in several regions we either didn’t have on our radar (Eastern Europe, Russia, Turkey etcetera.) and markets where success was uncertain (South Korea) proved to be huge. That and trying to introduce new players that don't traditionally play Supercell games.

We are very proud of what we have achieved together with our community. It’s only just the beginning of this story.

The Brawl Stars team currently is 26 members strong, however, we are currently increasing the size a bit to be able to produce even more content for our community. I would expect that by the end of the year we will be around 30 people, which should be enough for the future.

There is this dogma that players aren’t game designers and that listening to
your community will lead to failure...

It’s worth mentioning that this number includes functions like community management, data science, esports, player support and Q&A. Beyond this number, we have marketing people dedicated to Brawl Stars in our regional offices in San Francisco, Shanghai and Seoul.

Updates are a bit like our heartbeat and the game has been built around live ops from the moment we went global. As a company, it wasn’t necessarily part of our DNA when we started working on Brawl Stars in 2017, but we learned fast and have come a long way.

Today we have a very nice cadence of monthly or bi-monthly updates that are packed with new content for our community: Brawlers, skins, maps, game modes, challenges with every couple of updates seeing new features being released.

An example of this is that we released less than 50 skins in 2019, then increased this to around 80 in 2020 and now we are trying to produce 150 in 2021. We are supporting all our releases by actively interacting with our amazing community on all social media platforms and by releasing regular developer updates.

What steps have you taken to ensure that Brawl Stars maintains a sizable and active player base all this time after its launch?

We think that there are really two key ingredients: we are providing a constant stream of new features and content to our players while, more importantly, listening to our community. There is this dogma that players aren’t game designers and that listening to your community will lead to failure - we don’t believe this as a blanket statement and we are trying to get as much content from our community into the game as possible.

To give you a few examples: more than half of the maps in the game today have originated from community competitions or the in-game Map Maker. We are constantly implementing features and quality of life changes based on community feedback, alongside letting users vote on skins created by individual artists through Supercell.

Our player base keeps growing too as we hit our all-time daily active user record just a few months ago! We've been incredibly lucky.

To what do you attribute Brawl Stars’s consistently impressive grossing performance, and how do you sustain it?

We are producing content our community wants and we are genuinely listening to them. I know this is easier said than done, yet the last part cannot be underestimated.

We are trying to surf the fine line between incremental improvements and big bang moments for Brawl Stars and we do confirm our assumptions by looking at data. We will also go back to old features and fix them if they don’t work - and the community trusts us that we are doing so.

Tell us about the process of getting the game approved in China? How important is the Chinese market to Brawl Stars and its longevity?

We started the application process for a license in China in early 2018, but it took us until Spring 2020 to secure it.

The approval process has obviously changed a lot over the last few years. We started the application process for a license in China in early 2018, but it took us until Spring 2020 to secure it.

With "toon violence" and very few realistic elements in it, we did not have to make huge adjustments to the game in order to release it in China.

The overall goal at Supercell is to be a truly global games company; we want our games to be played and enjoyed by as many people as possible.

China is the biggest mobile gaming market on the planet with the most players, so naturally, it was very important for us and we do have a sizable player-base in the millions. While we obviously had an amazing launch, we would love to keep growing the game in China.

Did you always plan for Brawl Stars to be a player in the esports scene?

No, we did not. During a Supercell off-site in 2018, we held an internal tournament with north of 100 participants. There were these amazing moments and at some point, I realised that most of the waiters had stopped serving drinks in order to watch the screen - that was a “wow” moment for me personally!

I was involved with the early esports scene in Germany in the late ’90s and early ’00s and I was pretty stoked to potentially have a game like this in our hands. However, we really wanted to make sure that it’s something the community wanted, ultimately not believing that you can “create” an esports - but just support it when it happens.

Once it was clear that there was a demand by our community, we made the decision to bring in Kim - who had already worked on the early efforts for CRL (Clash Royale League) - as part of the core team, to oversee our esports efforts from within the team. This was also to be able to influence future developments directly.

It was surprisingly easy for us to transition. Naturally, those of us with kids at home were a little bit less productive, but overall our structure with highly empowered individuals served us really well.

Our culture is based on trust and hiring the best people we can find; turns out that really pays off in a crisis situation.

Overall, I’d say we might have suffered a bit in the creative department. Those very important, spontaneous conversations over a coffee where the greatest ideas come out of nowhere. However, we managed to stay very productive and even improved our output year-over-year. We shipped some major features like our Brawl Pass and the Map Maker alongside bringing the game to China in the same year.

What would you consider Brawl Stars biggest achievement since launch?

Even though progress isn’t linear, we’ve managed to grow the game constantly. The fact that we are bigger in 2021 than we were in the launch phase (or in between) is just amazing and arguably our biggest success. It’s also all very organic with very few new installs being driven by UA.

What lessons have you learned/are you still learning from Brawl Stars? Is there anything about the game that, in hindsight, you'd now handle differently?

Brawl Stars opened up new global markets for us, a new, younger audience and we’ve gone all-in with building a game together with our community, rather than for them.

We have some pretty big features in the pipeline.

There is one thing I will keep pondering about until the end of my career: when is the right moment to release a game (or feature)?

When you polish everything 100 per cent, you are losing so much time on stuff the community will dislike or flat out disregard, but on the other hand, having a backlog of things to polish after release hampers your ability to introduce new content.

According to Sensor Tower, Brawl Stars surpassed $1 billion in global revenue earlier this year. Anything you can comment on that.

While we are not confirming specific details, it was a great moment for the team to surpass the $1 billion milestone.

I’ve promised the team that we will celebrate with champagne and McDonald’s once the COVID-19 situation is under control.

Any further KPIs such as downloads, DAU or retention you’re willing to share?

We aren’t typically disclosing core KPI for our games, but to give you a sense of the scale of Brawl Stars today:

Finally, how has your experience with Brawl Stars informed where you are/what you're working on now?

We have some pretty big features in the pipeline. Besides some bigger community requests we want to tackle, we would also love to explore UGC much more than we’ve done in the past.

This was reinforced by the community reaction around the Map Maker when we released it in September 2020. We have a ton of cool stuff coming up!