From concept to creation: Plug Head, a hypercasual hit game

How Sunday supported the creators of Plug Head through rejection, to achieve their dream and build a hypercasual hit 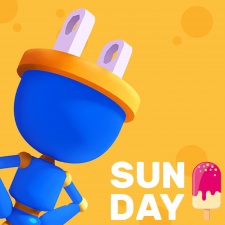 Balaji T.V. is Head Of Publishing at Sunday

It's a story as old as video games themselves: two guys, fresh out of university, dreaming of making their own games and building their own studio.

Can Acar and Kağan Örün grew up playing games from an early age and had a shared dream of developing their own titles. However, with the exception of some game jams, they almost had zero experience in game development.

"Before we started, we had so many crazy ideas for PC games, and as a designer, I have always been impressed with the simplicity of mobile games," Acar tell us.

"The similarity between the first arcade games and hyper-casual is apparent, and this is also reflected in our approach to hypercasual game development. Arcade games are our origin and we try to show our respects to that in mobile gaming, accepting its limits and the medium’s strong points."

After years of dreaming, early 2021 finally gave Acar and Örün the chance to realise their dream and start their own hypercasual studio, Regular Duck.

Among their first ideas was to develop a game based on the popular vehicle-switching mechanic, which lets players choose different vehicles based on the challenges in a level. Thinking outside of the box, Acar found a cool twist that had never been done before.

"After exploring several variations, I believed that using a plugging mechanic to switch vehicles might be satisfying and fun to play. I presented the concept to the team and everybody loved the idea," he explained. Thus, Plug Head was born.

The Regular Duck team immediately jumped on the project and began prototyping and testing different controls and mechanics. After a month of bold changes and hard work they finally felt confident enough to approach a publisher with their idea.

The first test results for Plug Head looked promising, however, it was extremely difficult for Regular Duck to sustain quality communication with their publisher, as it always felt slow and distant. Things went from bad to worse when the publisher finally rejected their game.

"We simply felt bad, the initial results without ads were great but they wanted us to implement monetisation early on. After the results came in, it didn’t meet their standards," said Acar.

"In fact, for the first test with monetisation, we believed the results to be really promising. We were not happy with the overall collaboration and wanted to completely cut ties on Plug Head with the publisher after the game was rejected."

The team had hit a low point and their hopes and dreams were almost crushed. This is when things suddenly took a turn. After seeing some of their prototypes, Sunday's publishing team immediately saw the potential of Regular Duck and approached them for a partnership.

"We first had our doubts, since Sunday is a relatively new publisher," Acar continues. "However, they welcomed us warm-heartedly and we immediately had many meetings until we developed a sustainable system and professional bond. After some time experiencing how they work and their game development approach we knew that Sunday was the right publisher for us and the success of Plug Head."

The Sunday team immediately went to work and analysed Plug Head’s gameplay and performance. Quickly they were able to suggest some critical changes to improve retention and engagement.

We felt great! Finally, after seven months of Regular Duck’s first establishment, we got a hit!

"We were determined to make Plug Head a hit and we could feel the same determination from the Sunday team. Seeing their dedication drove our motivation even further. The trust they established with our team made us fully confident in their decisions and recommendations for the future process of development."

After two weeks of iteration, Regular Duck saw some drastic improvements in the game’s KPIs, these changes resulted in an increase of day one retention from 33 per cent to 45 per cent.

"They carefully analysed the data and the game," Acar said. "We even conducted a playtest with a sample group. I felt like we are finally doing design research as it should be done. Apart from gameplay enhancements, Sunday generated dozens of platform-specific ad videos. They even contributed to the game itself by making skins and trails for the in-game shop."

After all these positive changes and support, the Sunday team offered to publish Plug Head. Regular Duck gladly accepted, which resulted in successful launch and even a top position in the app store charts. "We felt great! Finally, after seven months of Regular Duck’s first establishment, we got a hit! Sunday even sent us a Plug Head cake."

This has led to the development of a long-term exclusive partnership between Regular Duck and Sunday.

Sunday head of publishing Balaji Thangaraj Vijayan shared that: "The energy, creativity and passion that team Regular Duck brings to the table was amazing right from the beginning. It’s really rewarding when in a collaboration like this, all the internal learnings you share are utilised to create a positive impact upon a game and leads to a profitable hit. Together we hope to build a sustainable future for Regular Duck and the development of many more hit games."

If you are also eager to start working with Sunday, the company is already looking forward to meeting you as well, or visit their website https://sunday.gg/