A decade of Dice Clubs with B-Interaktive

PocketGamer.biz spoke to founder and CEO Eugen Barteska about the studio's recipe for success 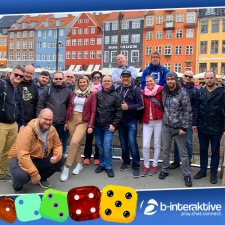 B-Interaktive, the creator of the popular skill-based game Dice Clubs, is about to enter its second decade.

Founded in 2011 and made up of an international team with over six native languages, the team has seen massive growth in its first 10 years of operation. The mobile games industry is, of course, huge, yet so is the competition. Maintaining and increasing a company's presence in this timespan is no easy feat and an achievement indeed.

To celebrate this milestone, PocketGamer.biz spoke to B-Interaktive founder and CEO Eugen Barteska to find out more about the company's birth, evolution - and what it's learned in its first decade of existence.

PocketGamer.biz: What inspired the creation of B-Interaktive?

Eugen Barteska: I was originally inspired as a teenager playing Populus via acoustic coupler on my Amiga, as well as a series of turn-based strategic simulations (SSI) games around the same time.

I was in the mobile business for around nine years before we founded B-Interaktive. One early inspiration was receiving a couple of emails asking for social/online functions within our games, most notably one from a dad in Germany, asking if we could make our games available via the internet to play with his daughter in the US.

Tell us more about the founding of the company

B-Interaktive was founded after the huge disruption to the mobile business caused by the introduction of the Apple app store and Google Play in 2008. My previous mobile games company had offices all over the world, operating in over 10 countries. At that point in time, mobile games were entirely business-to-business (B2B), where you dealt directly with the carriers.

Don’t follow the rules and think differently to achieve your dream.

Apple and Google opened the market to everybody. It became very easy to publish mobile games worldwide. Before that, you had to go through walled gardens and the gatekeepers at carriers in every country.

Thanks to this huge change, we founded B-Interaktive with the staff we had already been working with for several years. The company was new, but the team was already highly experienced - and we managed to be profitable after only three months and we remain so today.

What areas of gaming did the company work in before finding Dice Clubs?

When we founded B-Interaktive we knew exactly what we were good at, but my ultimate goal was to enter the multiplayer space. That's the reason for 'B-Interaktive' (pronounced: be interactive). We named the company after our ultimate vision.

Prior to Dice Clubs, our focus was firmly on mobile games and profitability. We developed a series of board games, alongside the concept of our take on the turn-based mobile game and a proprietary technology platform to make it all happen.

The first games you could play player-versus-player (PVP) on the same device were Checkers and Ludo (in German: 'Mensch ärgere Dich nicht'). Once the platform was in place we launched Checkers LIVE, a turn-based multiplayer game, which served as proof that we can successfully turn a classic into a social experience exclusive to mobile devices.

Our second big title was Ludo LIVE (in German: 'Mensch ärgere Dich nicht LIVE'). That game failed and we removed it a short time later. We've learned that usually (and especially on mobile) when playing turn-based games, players really don’t want to wait for their opponent to make their move. If possible, the turns should either be simultaneous or very dynamic.

Our third turn-based multiplayer game was 'Emoji Stars', a very nice social riddle game where you have to guess songs with emojis. With a very low budget, we managed to reach the Number One spot in the German Apple app store - for one day. Unfortunately, the game failed very quickly due to poor retention. We weren't nearly as experienced with the retention mechanisms as we are now.

How did Dice Clubs come about?

We already had the game in our portfolio as a single-player and local multiplayer title. It was one of the first games we made before we had our in-house online multiplayer platform in place.

Learning from the successes - and failures - of our previous mobile games was necessary for us to grow and become successful. The single-player version of Dice Clubs was always visible in the dice category charts, we had good retention and it worked as an 'asynchronous' title. You could play a turn-based game together and you didn’t have to wait for your opponent like you would need to in chess, for example.

How was Dice Clubs launched?

The first version was native to iOS to capitalise upon Apple's innovations in the early days of the App Store, with the Android version launching five months later. The soft launch at the beginning of 2015 was very quiet. We gained a couple of thousand users through cross-promotions and offered a basic subset of today's features.

The big challenge that everybody was facing was how to gain users. We had a good portfolio of games, so money was not a huge issue, and we saw that we were receiving a lot of four and five-star ratings, while retention was way above industry standards. That motivated us to invest more into the game's multiplayer features and social engagement.

Outside an engaging mechanic, what makes the game so successful?

The game really took off about 18 months after launch and quickly became our number one product. We made it successful by constant improvements and the regular introduction of new game modes, social engagement, and features such as the creation of public and private dice clubs, chat, tournaments, leagues et cetera.

The magic of Dice Clubs' success comes from all of these different aspects. As Europeans, we have also fully localised it, including our server push system into 11 different languages. We're engaging with our users to spread the word and rewarding them when they do.

We're also actively acquiring users, and have a very active and organised community around this. We listen to and talk to our users every single day by email, chat, and even phone call, as well as answering every app-store review.

What are the plans for B-Interaktive in its second decade?

To date, we have finished only around 10 per cent of our plans for Dice Clubs, so we are quite busy. In reality, we're getting a huge amount of input and suggestions from our players, and we are looking into all of them. This is really fantastic because we have learned that whatever we might come up with, it may not necessarily be what our users actually want.

Don’t develop a game for yourself, but rather for your audience.

That doesn't mean that any kind of crazy idea will fit into our strategy, but the fact our users are still engaging with us so regularly is awesome. We are always looking for new titles, products, and projects, but as long we are growing, Dice Clubs remains our main focus.

Working in parallel on new products allows us to improve our client/server tech without having to touch the live operations for Dice Clubs. You never know if a new product will work, but it all helps us to make Dice Clubs even better.

What have you learned from the company's first 10 years?

Don’t develop a game for yourself, but rather for your audience. Our average user is 34 or over and more than 50 per cent of our players are women, who would never call themselves 'gamers'.

Our game is seen as more of an 'entertainment' product rather than a 'videogame' as most people understand this term. So it is basically an engaging and entertaining niche for a very broad audience.

What do you wish you had known when you founded B-Interaktive?

This is the most difficult question. I would say don’t follow the rules and think differently to achieve your dream.

Evolution, engagement and excellence – how Dice Clubs’ focus on players has shaped the game’s success