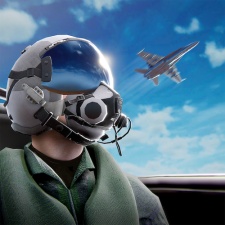 This week, we spoke with Wildlife Studios game director Luiz Piccini about the influence behind Sky Warriors and how to hone controls for a virtual aeroplane.

PocketGamer.biz: Where did the initial idea for Sky Warriors come from?

Luiz Piccini: I used to play air combat games a lot when I was young. My love for games like the Ace Combat series inspired me to make a game in this genre.

Looking at the download numbers of other aeroplane games, there is a huge interest in these games. However, there is no clear winner for mobile air combat games. Together with my team, we set out to make the best air combat mobile game.

There is no clear winner for mobile air combat games

We first toyed with the idea of an aeroplane game back in June 2020, which we prototyped during October. However, the actual development of this game started on December 14th, 2020.

From the team being allocated to the project to the global launch, development took just shy of 10 months.

The team size varied throughout the project. On average we had around 20 people working on the core development team at a given time.

Over the course of development, we had 40 different people who had worked on the core team at some point in time with over 200 people supporting the game during those 10 months when we look at the entire company.

The biggest challenge of developing Sky Warriors was getting the controls right. It’s very difficult to navigate in three dimensions with 12 degrees of freedom as opposed to only navigating in 3D.

It was very important for us to empower users to have full control of the plane which was difficult with the limited inputs of a mobile device. Honing the controls just right was one of the things we dedicated the most time and energy towards.

We were already enjoying the game we built since the first prototype was created back in October 2020.

In July we held a soft launch in Nordic countries, it was during the soft launch that we really got a sense of the potential of this game. All of the feedback that we’ve received so far has been really positive.

Live ops are crucial to any game’s long-term success. For Sky Warriors, we have several events and new content planned for the next few months to help lay down the foundation for years of live ops to come.

How happy are you with the game’s launch so far?

Really happy! On top of the satisfaction of fulfilling a childhood dream by making my own game, we are also quite happy about the game metrics, which have been above our expectations.

We are still in the infancy of the game, but we are already confident that it will be a great addition to Wildlife's portfolio.

We have a lot of new and exciting updates coming out after launch. We’re planning to release a new map and several plane cosmetic upgrade options before the year ends.

The feature I am most excited about rolling out is team play, which allows players to team up with friends for battles.

Additionally, we’re planning to add controller support and a few other gameplay surprises in the next couple of months.

What in-game events are you planning in the future for Sky Warriors?

I don’t want to spoil anything, but I can tell you that veteran gamers will love what’s coming.

Personally, I’m staying on the Sky Warriors team for the next few months as we work on rolling out all the updates in the coming months. Plus, I still have plenty of ideas about how to improve the game for an even better experience that I want to work on.

Wildlife Studios doesn’t focus on one genre of game. From Tennis Clash to Sky Warriors, I wonder what type of game I’ll work on next.

Wildlife Studios is entering the blockchain, NFT, and Web3 space