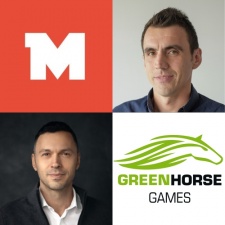 It has only been two full months since the start of 2022 and we have already witnessed some of the largest games industry acquisition announcements of all time, from Take-Two and Zynga to Microsoft and Activision Blizzard, and the industry shows no signs of slowing down.

In our Done Deal series, we speak with companies to explore the decision-making behind acquisitions, the impact on both parties, and the effects on the industry as a whole.

We spoke with Green Horse Games (GHG) founder and CEO George Lemnaru and Miniclip COO Marius Manolache about Miniclip’s acquisition of GHG last year and how a collaborative culture benefits both parties.

Lemnaru: At that time we had a clear plan of growing independently and the means to make it happen, so as a result we were really focused on this first and foremost. However, as we began speaking to the Miniclip team it quickly became clear that they had the resources and network that could help us to reach our goals faster and increase the scope of what we wanted to achieve. From there, we started reviewing what we wanted to do, and kept an open dialogue with Miniclip to better understand how we could support each other.

Manolache: Miniclip is always searching for opportunities in the M&A space. We work diligently to be a positive leader and find teams that we can help to grow and to find greater success. We have a very refined process to seek out potential studios we can help, and Green Horse Games was exactly what we were looking for. They are a great team that has already shown they are experts in their field, with a successful model that we were able to scale. Once we started speaking, that became all the clearer.

Lemnaru: For Green Horse Games, our primary goal was to gain access to support to strengthen areas in the company where we had a smaller number of staff, or where it simply wasn’t viable to have specialists. Having access to Miniclip’s talent was something we were very excited about, and a major draw for us. Overall, the acquisition took around three months from initial discussions to officially becoming part of Miniclip.

Ensuring that culture and ethos are aligned between both companies is extremely important.

Manolache: From our side, we’re extremely interested in studios that are working on game genres that we may not currently be involved in. We seek out studios that have demonstrable and established success in these types of games and use our resources to help them take everything to the next level. M&A at Miniclip is all about adding value to the teams we acquire and invest in, while ensuring that we can provide everything they need to grow.

How has this acquisition benefitted your company going forward? Perhaps new hires, resources or significant growth?

Lemnaru: In our case, access to specialists and contacts within the gaming industry has been an important benefit. We now have a wide range of contacts across the industry and within the world of games that can unlock bigger and better activity for Green Horse Games as a whole.

Manolache: The acquisition has allowed Miniclip to have an important presence in Romania, which is a talent hub we previously hadn’t been overly visible in. But most importantly, we can learn so many new lessons about the types of games that Green Horse are experts in. We share so many insights with each other on a daily basis, so it's been a very rewarding partnership and continues to deepen.

Lemnaru: During the early stages, we did consider one potential issue that had to be taken into account. With any acquisition, ensuring that culture and ethos are aligned between both companies is extremely important. It's common to hear about acquisitions where businesses can lose their identity or find new ways of working hard to adjust to. However, Marius and the Miniclip team were very transparent throughout the process and helped us to put these early concerns to rest.

It's so important for both parties to have a collaborative culture

Manolache: As George explained, it's so important for both parties to have a collaborative culture, so that working together under the same label is an organic and easy transition for everyone. The entire process took place during the pandemic, which meant the early stages of our interactions were entirely remote. It would have been great to meet in person, but we soon found that we were very similar despite this, and the whole process went really well.

Lemnaru: From the early stages, we discussed our existing strategy and the fact that we wanted to continue it. We wanted to understand what would happen after the acquisition and if we should anticipate any amendments, but Miniclip was very helpful in this regard. They looked at our strategy and helped us to build on our plans, but they also made sure not to change it much. It was still our strategy, just scaled up, and the Miniclip team offered a large amount of honest and valuable feedback.

Manolache: When it comes to acquisitions, we have zero interest in changing the companies we purchase to suit us. We want to empower and expand on what makes them great, after all it's the whole reason we are interested in them. If a company has proven success, there is no need for us to change them and jeopardise the great work they are already doing.

Lemnaru: I’m a perfectionist at heart, so I can always find things to improve! However, looking back at the success we have seen and all the potential the acquisition has resulted in, I really have no desire to change anything about the process.

Manolache: It's been going really well, and we’ve hit many milestones since Green Horse Games joined Miniclip. It's also been a very motivating experience, and proves our ideology behind acquisitions works in practice, so we are even more driven to continue our efforts to acquire studios.

Lemnaru: I feel that it’s a very case by case situation. There is good M&A as much as there is bad, and the intentions behind acquisitions are a major contributor to its success. Just focusing on short term money is a destructive approach, both parties have to consider if each side will be the right fit, and if the process will actually add value to both.

M&A should be about enhancing leverage and improving everyone's ability to grow.

Manolache: I completely agree with George here, acquisitions have to be so much more considered than an aggressive integration. Sometimes companies neglect the delicate nature of M&A and rush into high speed transitions with little consideration of the consequences, and it risks everything in the process. We’re not looking to acquire a studio to change them, we know that to ensure M&A is valuable for everyone, it's more about helping companies be more successful. M&A should be about enhancing leverage and improving everyone's ability to grow.

Lemnaru: As a company looking to be acquired, I would say that you need to be straightforward and honest regarding your ideals. Consider your feelings and what they say about the process. Are you excited to be acquired? Are you nervous? Do you still have the motivation to continue your work after an acquisition? These are all important questions you need to ask yourself and to discuss with your partner.

You need trust and support to be established from the start, and honesty about your feelings will help your partner to create systems that work for you. Collaboration is in everyone's interest throughout the process, and being transparent about your feelings and expectations will ensure your partner is aligned with you. It's not money that makes the deal work, it's much bigger than that,

Manolache: Exactly, it's not just a financial transaction. You have to consider how the process will help both parties, and ensure that it adds tangible value. You have to know the team, understand how you interact and much more.