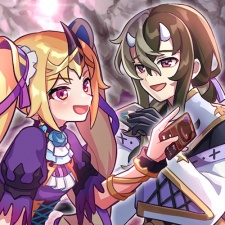 This week, we spoke with Kemco game director Riki Arimitsu and overseas marketing Matteo Conti about the development of deck-building roguelite RPG Overrogue, such as striking a gameplay balance and the ease of working with previous partners.

Riki Arimitsu: The base idea came from the intention to combine and mix our strongest genre - JRPG - with another emerging popular genre, a deck-building roguelite. It was a challenge for both Exe-Create (developer) and Kemco (publisher) being a completely new genre, but we were fully confident the current tag-team was skilled and experienced enough to achieve this goal.

How long did development take and how many people worked on the game?

Arimitsu: The development period of the mobile version (for Android and iOS), including the initial planning stage, was six months. The core staff are around 10 people, including programmers, designers, planners, and game directors between the development company, Exe-create and the publisher Kemco. If we also consider other support staff and testers for detailed works we can say a team of around 20 people worked on the project.

Matteo Conti: We usually work on a global release after we soft launch the game in Japan and localise it to English. So an additional four to five months are dedicated to the localisation, with the help of external translators and internal localisation staff, which adds another four or five people involved in the project.

Another point I’d like to mention is that many may be surprised by the brevity of the entire development period. This is achieved only because of our firm partnership with the development company that has been built through decades of collaboration and thanks to their great and constant effort through the years.

What have you enjoyed most about working on Overrogue?

Arimitsu: Determining each card effect and making adjustments through testing repeatedly was indeed one of the toughest but most enjoyable tasks.

During the development stage, we found many cards that turned out to be super strong and needed to be weakened. This chaotic environment was more enjoyable than stressful, and so we proceeded with until completion.

Arimitsu: As we were approaching the completion of the card system part, we noticed the JRPG elements, especially the exploration and dialogue parts, could become a little bit annoying for players who wanted to enjoy card battles, while heavy card battles could be the same for other JRPG players who like to enjoy traditional exploration and story. This was the biggest challenge: to achieve a balanced experience.

How happy are you with the launch of the game so far?

Arimitsu: Even after releasing the game, new thoughts and regrets for improvements that could have been done continue to arise, but during the development the entire team worked together to realise this project, and that goal has been achieved successfully.

Conti: Considering the initial high reception that the game has achieved in Japan when it soft launched and all other positive and encouraging reviews we have got from fans up until now, we believe the game got satisfying results.

What is your approach to live ops with Overrogue?

Conti: Live ops is something we usually don’t focus on that much, as our games are built and structured to be a stand-alone game experience. We test them very carefully before a release so the games would be fully enjoyable even without live ops and therefore most of the time we see only a few cases where they need updates for minor bug fixes. We trust our core fans and the experience our games have to offer, for organic and continuing traffic from JRPG fans, not to mention the new audience coming from roguelite games.

We tend to rely on new projects after releasing a new game, so people can continue to enjoy completely new games one after another. Also, games that become a hit in the mobile market usually can be ported to other platforms, such as games consoles, to spread the audience width.

Conti: We are continuing to work on new JRPGs from retro-style, series titles to relatively new IP projects in 2022. Many of these will be localised to English for a global release later on, but those who are interested in newest projects can stay tuned on our website or social channels for more information!