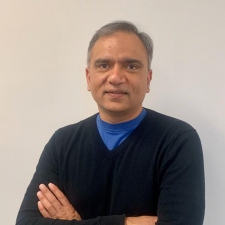 Rosen Sharma, CEO of BlueStacks, has a straightforward vision for mobile gaming: "I send you a link to click on, and you play it."

It sounds like simplicity itself, but Sharma argued that now.gg, Bluestack’s mobile cloud platform, and recently-launched Creator Hub and Creator Studio represent something more disruptive to mobile gaming.

"We think of now.gg and the mobile cloud in general in a very different way to how people think of a cloud gaming server. Instead of something akin to a subscription service - a separate space to log in with a catalogue of games to play - we think of cloud gaming like YouTube. Of course, you can play through now.gg but you can also embed and play that game anywhere: onto your blog or Facebook page or a gaming fandom site."

Although some publishers have pivoted away from browser-based games towards mobile publishing, recently including Miniclip, Sharma emphasised his commitment to a browser-focused approach: "One thing we realised was a rethinking of 'multiplatform' - less a means of playing games across different types of devices and more fundamental; how many of your friends can play.

The latest updates to now.gg, Creator Hub and Creator Studio, allow users to mod their games, from tying bespoke JPEGs to victory screens to implementing new outfits, in ways that have not previously been available on mobile - which Sharma attributes to yet another promised potential enabled by the cloud.

"You’ll never be able to personalise the experience on iOS or Android. But it’s incredible to see kids, who are the ones coming up with the coolest stuff, infusing UGC with pop culture references and memes - such as the Will Smith incident at the Oscars - at an incredibly fast rate. I actually think we will see most people will play modded versions of games, over the original versions, which will just be too boring to play nowadays.”

This may sound akin to the touted cultural promise of the metaverse, but Sharma is keen to distance now.gg from any instance of the word ‘metaverse’: "I stay away from that word, because it means so many different things to so many people."

Much of now.gg’s functionality is dependent on a browser-centric approach which circumvents Apple and Google’s control over its operating systems, including its NFT integration, which ostensibly allows the creation of NFT games and NFT-based monetisation in existing mobile games.

That is an important part of Bluestack’s promise: existing mobile games, because Sharma is so far not impressed with the current suite of blockchain games.

"If you look at the Web3 space today, most titles are… first-generation games. They’re not really good games, but focused on play-to-earn mechanics. They’re very primitive. But I ask every mobile gaming CEO for their three priorities, and most say three things: NFTs, metaverse, and multiplatform. How do you incorporate the first if you’ve an app on iOS or Android?

"Let’s take Apple, which has a 30-day return policy for in-app purchases, and I decide to make the most of that. How do you return something that’s already been written on the blockchain?"

I ask every mobile gaming CEO for their three priorities, and most say three things: NFTs, metaverse, and multiplatform.

Sharma made bold claims to now.gg’s blockchain functionality including enabling developers to "seamlessly" incorporate NFTs into their existing titles through the now.gg API, "and just let people purchase NFTs as if they’re purchasing any other IAP. You don’t have to worry about returns. You don’t even need a wallet to go through those transactions" - although when asked how transactions can be completed without a wallet, Sharma responded: "We have a backend solution."

Others, including Com2uS’ Kyu Lee, is bullish about current gatekeepers Apple and Google taking progressive steps towards blockchain gaming. But Sharma is less convinced: "Apple and Google will be required to make the NFT trading fee zero for it to work, and I don’t believe Apple and Google are ready to give away $100 billion in revenue."

Regardless, like many Web3 operators, Sharma sees similarities between early conversation and hesitation between Web3 and when the internet steadily became available to the mass market: "I’m old enough to have been alive through all these cycles. In 2000, people would look at pets.com and say, 'this internet thing is all nonsense'.

"I think we’re going to go through the same cycle. There are some very good examples of Web3 economics being integrated into games, but it will come about with good quality games. Play-and-then-earn, not earn-and-play. And the cloud will solve a lot of issues that exist within current distribution models and app stores."