Miniclip and SYBO CEOs Saad Choudri and Mathias Gredal Nørvig discuss the seismic acquisition, Subway Surfers IP, and why hands-off is the best approach for support 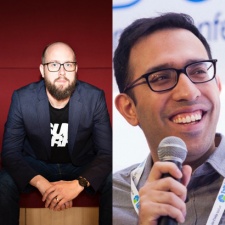 It was only February 2022 when SYBO won Best Live Ops at the Mobile Games Awards 2022, and has become celebrated as the most downloaded mobile game ever. But the mobile games industry erupted when it was announced that Miniclip would be acquiring SYBO.

Saad Choudri, CEO of Miniclip, and Mathias Gredal Nørvig, CEO of SYBO, spoke with PocketGamer.biz on the acquisition – the value of which has not been disclosed, with both parties private, but is believed to be one of the largest in the mobile space in a year that has already dwarfed preceeding years on M&A – and how you support a title and franchise which have already escalated exponentially.

PocketGamer.biz: Subway Surfers has accrued a monumental array of accolades – and perhaps that most cherished of prizes, most downloaded mobile game. So, the pressing question is, what's next? What does scaling up look like for SYBO's flagship title?

Saad Choudri: During our discussions on acquiring the company, it was important to both teams to allow SYBO to keep the magic ingredients that have made Subway Surfers one of the most successful, rewarding and exciting experiences on mobile.

SYBO’s ethos, vision, and drive, together with our shared culture and DNA, plus Miniclip’s extensive tools to amplify and extend the player base, will increase Subway Surfers’ organic downloads and daily active users, expanding its reach to new markets and territories.

Mathias Gredal Nørvig: We’ve witnessed steady growth as a studio over the years, with more than 150million monthly active users for Subway Surfers alone, and these numbers will only be bolstered with Miniclip’s support.

We’re always eager to deliver content and features to our fans that amplify the Subway Surfers experience, and we’re excited for players to get their hands on our brand-new game, Subway Surfers Tag, now playable exclusively on Apple Arcade.

Where are the key opportunities Miniclip sees for escalating SYBO's operations? Is Miniclip looking to enhance its suite of established franchises, or is there more promise in SYBO's new titles?

Choudri: Miniclip has always had a strong focus on building high quality games that unleash the gamer in everyone, which has helped define the business and allowed us to lead in a crowded marketplace, delivering consistent growth through building our M&A with fantastic and innovative new partners.

One of the key reasons that Subway Surfers continues to dominate the top of the charts is because every three weeks, the game gets a season update that is treated like a new launch. The SYBO team eventicises each season, keeping the game fresh by adding new features that players want. You can’t have the same game for ten years, and maintain its success, if you don’t do that.

Nørvig: While we have been dedicated to elevating the single player Subway Surfers experience for the last 10 years, we are ready to pivot to other genres within the IP and beyond.

Besides Subway Surfers Tag on Apple Arcade, we have one title in soft launch, with several others in development.

We are confident that Miniclip’s insight and leadership will ensure the success of each new launch while maintaining a focus on broadening our flagship title.

SYBO's managerial team will remain unchanged, will there be any changes to Miniclip's c-suite following the acquisition?

Choudri: SYBO will continue to operate as it always has, but whereas before it was owned by its founders, now it is owned by the Miniclip Group.

Miniclip’s C-Suite will remain the same following the acquisition of SYBO.

Will Miniclip be looking to take a proactive role in supporting SYBO's operations, or is this a case of looking at SYBO's current successes and not tinkering with a winning formula?

Choudri: Our approach to managing acquisitions is very much to support and encourage them to continue to thrive in the markets in which they are based. Great examples of our previous and current successes include Ilyon in Israel; Masomo, which is a Turkish company; and Green Horse Games in Romania.

SYBO is joining the international Miniclip Group, but we will continue to operate as usual

Post-acquisition, each studio has retained its identity and standing in the industry in their home countries, continuing to grow with our support and encouragement.

Nørvig: SYBO is joining the international Miniclip Group, but we will continue to operate as usual. Our team will still be based in Copenhagen, delivering the content fans have come to love. What we have now is a perfect partnership – two decade-old companies tapping into our wealth of experiences for further growth.

Are there any regional markets Miniclip is looking to push SYBO titles into? I know the Chinese version of Subway Surfers, Subway Parkour, is operated by iDreamsky, but which are Miniclip's geographic priorities?

Choudri: Miniclip is a global business, operating across eight different countries with a workforce of more than 900 people. We want to unleash the gamer in everyone, and that comes without any geographical priorities or restrictions.

Nørvig: Sometimes I can’t believe the numbers, but even with over three billion downloads, Subway Surfers has untapped players in many territories. We are still in the early stages with the IP, and its opportunities.

Sybo is hiring a senior producer for an undisclosed project