Reine Abbas runs Wixel Studios and the academy SpicaTech. She talks to us about the challenges of teaching game development amid the chaos of life in Lebanon recently. 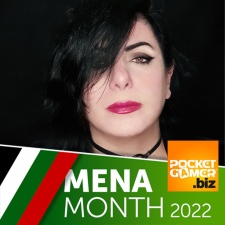 Reine Abbas will be a familiar face to people who have attended conferences like the Jordan Gaming Summit 2018, our own Digital conferences during the pandemic, or Pocket Gamer Connects London 2022. As a game developer, activist and educator, she speaks at events and has helped judge The Big Indie Pitch on more than one occasion.

Reine Abbas is the owner of Wixel Studios and the CEO of SpicaTech, a gaming academy. She was listed as one of The World’s 100 Most Powerful Arab Women for two years running by ArabianBusiness.com. PocketGamer.biz caught up with her over Zoom, live from Lebanon, to discuss the challenges and opportunities of the Middle East games industry.

This is the latest part of our series talking with MENA game makers. There’s great potential in the Middle East and North African games market right now. The pandemic-inspired growth in Western markets seems to be slowing; in contrast, the MENA market has become the fastest-growing scene in games. Lebanon, however, has its own challenges.

Here’s the full video panel, with some excerpts below...

You can watch the full video interview above to see and hear about her experiences in her own words. And here are some key takeaways from the conversation….

The most important lesson learned in the games industry so far
It’s not enough to only produce a game and to publish a product. The experience is the most important thing. It’s not the art, it’s not the technology, it’s not the development. It’s really the player’s feelings and journey, and experience. For me, this is what makes a game successful: the sensations, the engagement curve. I’m talking about engagement theory. For me, games should be not only fun, but they should be engaging. And this is really the biggest mission for a games designer.

On being a creator during a difficult time in Beirut
I live in Lebanon… I was in my office when the explosion happened. I was saved by chance. A few seconds between me and my death. With all the effort I’m doing to boost the gaming industry, and to create these jobs, in this moment, you knew that your own government is killing you. It was a shock for everyone. And everyone expected that I would stop everything I’m doing, and would close all my business in Lebanon. But I didn’t stop. I decided to stay in this country: I’m not only an entrepreneur, I’m an activist. I’m also working on the streets. I protest. I’m trying to change the system in Lebanon. For me, it’s a fight I have to continue. Our life is always in danger in Lebanon. But our country would never give up.

On the opportunities in Saudi Arabia
Three years ago, I started in Saudi, to expand there. There’s a big need for us in Saudi. Because everyone is investing in esports and gaming [but] not in education. It’s really great to invest in this industry, in esports and gaming. But they are investing in the productions and the tournaments. No one is investing in the education or training part. So SpicaTech is playing this role. We train students from all ages, in different sectors and industries.

Everyone expected that I would stop. But I didn’t. I’m not only an entrepreneur, I’m an activist. I’m trying to change the system

Advice for a young person who wants to start making games
Let’s say they are a creative person, or they are a developer or an artist. The first advice from me: I would tell them to learn about the engagement theory. Psychology is a big part of the game experience – how they play the experience. This is the know-how they don’t have. They need to study engagement theory about the audience, the dynamics… so they can create anything engaging and fun.

The second thing is to start [small]. A lot of gaming designers want to understand 3D gaming, for a big action-horror game. But my advice is to create something casual, a really smaller-scope game so that they can really experience doing something fun and easy. Create something innovative in the mechanics of the gameplay. Focus on the gameplay, and have something really cool and fun. Focus on the mechanics first – it’s easier to test or publish an early prototype online, to take feedback play from the players. Start with a really small product, and then you can jump towards a bigger product. Everyone wants to do something big from the start. But they don’t have a team. They don’t have the experience or the know-how. So that’s why a casual, really small game, and something innovative, will help you to shine, to have visibility, and to test the experience you’re doing. And then you can jump step by step to something bigger.

On returning to live conferences and events
We should return to this protocol: live. It’s different when you are on stage, and talking to people in front of you. When it was all online, there was frustration. They’re always something between you and the audience. You’re looking at the screen, but you’re not looking at them. [When presenting physically] you have to be really spontaneous. You have to be real, not only technical. And this physical connection is amazing.

You can watch the whole conversation above or on YouTube, including Reine talking about her own background in the world of games and about the role of education and working with children. If you found this insightful, check out another of her talks here: she has been a speaker at our events on many occasions and you can see her here speaking at PGC London in February 2022 as part of a panel on “Indie Survival: What do you Need to Know to Stay Afloat in This Industry?”

We have more interviews, both video and written, planned over the month. Remember to bookmark our Marvellous MENA Month content, and register for our events in Amman (12-13 November) and Riyadh (30 November-1 December) to discover more about this fast-growing games market.