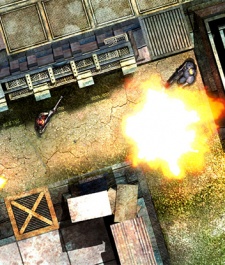 The team of four had previously worked for the likes of Lionhead, Criterion and Codemasters, and now they were setting up shop in a cheap office in Guildford.

The ambition was to create a turn-based strategy title for core gamers, and the fruits of that labour were Hunters 1 and Hunters 2, which have together accumulated a total of more than 1 million downloads since launch.

Introductions out of the way, Maguire explained that there are five things that are needed to create a good indie game.

The right platform is first, then you require the beginnings of a good game design and a team that can make it.

Cheap office space is the rather practical fourth item on Maguire's list. The final bullet-point is self-funding.

In 2010, Maguire was courting investors and publishers, and he spent a lot of time saying "we've almost got a deal."

Finalising those deals are the tricky part, he explained, and advised attending developers to treat self-funding as plan A. Investment and publisher support should be relegated to plan B, he argued.

Once you've made a game, you have to market it, and Maguire had guidance on this topic too.

He suggested a lazy press release as a low-cost means of driving limited press coverage, and advised regular sales events as a means of boosting discoverability.

With Hunters, Rodeo Games regularly cut the game's price from $4.99 to 99c in order to maintain a presence in the App Store charts.

"If you drop down past 100, you're not going to get any people casually stumbling across your game," Maguire explained.

Of course, this tactic only works with paid games. When quizzed on the studio's continued use of the premium pricing, Maguire answered: "We're aiming for core gamers, and [freemium] still doesn't sit well with a lot of core gamers."

But regardless of target audience, the overriding message from Rodeo Games was a positive one. "It's very doable," Maguire said. "If you make a good game, you can survive."

Unity has its strengths but we chose Unreal Engine 4 to stand out from the crowd, says Rodeo Games

The Room, Ridiculous Fishing and Badland up for Satellite Awards