Fourth addition to the franchise launches on October 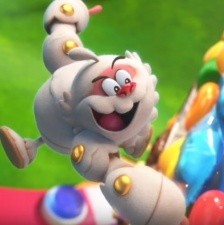 King has revealed it will launch a new version of the hugely popular Candy Crush IP in October.

Called Candy Crush Friends Saga, the title has been in soft launch for well over a year since May 2017.

The latest addition to the match-three franchise adds 3D graphics and new characters who can unleash special moves to help players complete levels. New game modes meanwhile include ‘dunk the cookie in the chocolate’ and ‘free the octopuses and the mammoths’.

On the same day, King plans to launch a special event in New York which it hopes will be the “biggest ever live gameplay experience”.

“We’ve added unique features and a new layer of strategy and depth to the game that will take players on an epic journey through the colourful Candy Kingdom like they have never experienced before. For those who loved playing Candy Crush Saga the first time, you have to try this new game - you will really love it.”

Crushing it: The diminishing but lucrative returns from the Candy Crush sequels