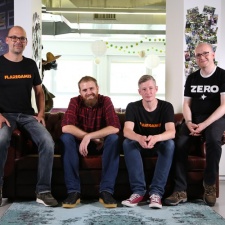 The Warhammer 40,000 collectable cards were originally launched by Games Workshop in the early 90s, with a physical re-release in 2017.

Flaregames will publish a digital version of the card game developed by Well Played Games, to be released on the App Store and Google Play on November 22nd.

In a statement, Flaregames expressed the role it hopes Citadel Combat Cards can play in onboarding potential fans to the Warhammer 40,000 universe.

“What they’re creating is a living and breathing Citadel Miniatures card game experience and we can’t wait to see the reaction at launch from both diehard Warhammer fans and the broader mobile gaming audience.”

Well Played Games co-founder Stuart Maine added: “As lifelong fans of Warhammer 40,000, Citadel Combat Cards is a dream project. We’ve been able to fill the game with both brand new and classic miniatures, plus references for both new and veteran players.

“We’ve really enjoyed creating this game and are looking forward to supporting and expanding it for years to come.”