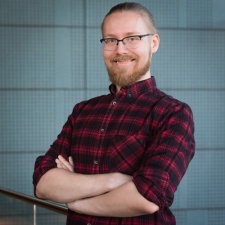 Helsinki-based developer Hipfire Games has raised an additional round of €180,000 ($205k) as it ramps up development on its debut virtual reality and mobile cross-platform title Fail Space.

In a statement to PocketGamer.biz, Hipfire Games CEO Antti Sartanen (pictured, main), formerly an artist at Paf and Supercell, said the investment would give it a financial runway of nine to 12 months as it gears up to launch its debut title.

Fail Space is a multiplayer VR game for up to four people who must work together to operate a space truck and deliver goods across the galaxy.

“We believe that the future is portable and it makes sense that mobile device owners could jack into the experiences of their VR-wielding friends and interact with them,” said Sartanen.

“Our vision is to make VR gaming into one of the many natural ways of playing and it's a lot easier if the players are not isolated from everyone else.

“Hipfire's long-term focus is firmly on creating a diverse portfolio of multiplayer games and refining our technology that will easily allow players with different types of devices to join game sessions of players using high-end or stand-alone VR devices.

“We're proud to add such great backers on top of our previous investors, including Techstars and Nordic XR Startups.”