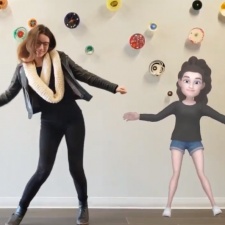 AI character development firm DeepMotion has teamed up with Samsung to bring its Digital Avatar solution to the next line of Galaxy phones.

Unlike Apple’s animoji, DeepMotion is promising full-body expression capture rather than just facial, using a blend of camera capture and AI-driven animations.

“Body language is a key part of human social interaction, and our partnership with Samsung empowers Galaxy S10 owners to use their natural body movements to express themselves through emojis,” said DeepMotion CEO Kevin He in a statement.

“From showing your original moves as a dancing avatar to waving hello to a loved one as a character from an animated film, DeepMotion’s Digital Avatar solution opens new ways to communicate through your device.”

While a novel use in communication, the ability to extrapolate 3D animations could have a powerful potential in the realm of multiplayer mobile gaming - either through cost-effective motion-capture for developers, or enhancing social tools available for players.