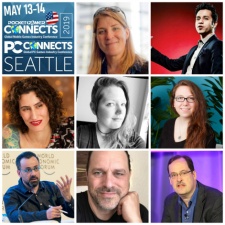 We’ve already revealed speakers from NBCUniversal Media, NCsoft, and NetEase will take part in the nine-track conference schedule at Pocket Gamer Connects Seattle on May 13th to 14th - see here for more on that.

But today we’re proud to announce that EA, East Side Games and Nexon M will join the speaker roster of 125 world-class experts at the two-day B2B conference and exhibition entirely dedicated to the games industry.

Keeping you up to date with the very latest trends in games, we’re thrilled to share the news that EA’s Katherine de León will speak at the show. Also speaking is David Edery of Spry Fox, as well as two panels featuring Exponential Entertainment’s David Long, and Solon Bucholtz from LBC Studios.

Key amongst those trends is the rise of hyper=casual games, which is why this growth sector now has its own conference track for 2019. You’ll hear the latest learnings and inside information from leading practitioners such as East Side Games’ Josh Nilson, while Andrew Green of Knock Knock will explore instant games and the future of frictionless.

Sam Chandola of Pepper Esports will also explain how Esports is changing the face of gaming and what that means for developers everywhere.

Inclusive content is vital for games to satisfy today’s players.

A Thinking Ape’s Finn-Lily Heartwood and Nicole Maiorano will present a case study of how the studio has encouraged diversity in its players through live ops. They’ll show you how inclusive content is vital for games to satisfy today’s players that expect to feel represented in the media they consume.

A Thinking Ape will also be represented by Tayber Voyer at the show, with a seminar explaining how the company has used its core values as an operating system for thriving as an indie studio.

Dan Laughlin will chair a panel discussion looking at creative user acquisition and growth, including how to deal with competition and legislation. Sticking with that theme, Kate Edwards of Geogrify will discuss culture and diversity, as well as a legal fund for indie developers.

Anyone looking for new markets for their games should attend the seminar by Marcelo Serres of Pebblekick, offering an overview of the South American market.

Similarly, Maysalward’s Nour Khrais will take you through the MENA markets, detailing its revenue level today and future expectations for the region. As well as addressing the importance of localisation, Khrais will explain methods for monetizing F2P games in MENA, including alternative stores, payments and more.

The steps the industry needs for blockchain to have the same impact on gaming as the mobile industry.

Get on the blockchain train!

With an entire track dedicated blockchain games, join us for a series of seminars that will look at everything from how to make great games that utilize this technology to how it can become the next big thing.

Alexander Casassovici from Azarus will demonstrate how developers can augment their game with blockchain without sacrificing the user experience. His session will suggest ways your game could appeal to the hundreds of millions players out there that just want to have fun and couldn't care less about gas and private keys. Casassovici will share the latest tips and tricks that will allow you to capitalize on the blockchain's benefits with no friction.

Dragon Foundry’s Paul Barclay will chair a panel discussion - featuring Donnie Dinch of Bitski - addressing the steps the industry needs for blockchain to have the same impact on gaming as the mobile industry.

And we’re looking forward to hearing from John Linden of Mythical Games about the challenges and opportunities in developing their game, Blankos.

Development, user acquisition and why 2019 will be the year the PC games industry changes forever.

Making its Stateside debut, partner event PC Connects joins in the fun in Seattle, featuring a further four seminar tracks covering development, user acquisition and why 2019 will be the year the PC games industry changes forever.

You’ll get to hear from industry legends such as Ed Fries from 1Up Ventures, who will be joined for a fireside chat with Kanoogi's Chris Taylor.

And anyone looking for a glimpse of the future won’t want to miss Eric Goldberg from Crossover Technologies as he counts down the three major disruptions that will impact the games industry in 2019 and 2020.

Join in the fun with 1,000 delegates from 500 companies - all ready to network with you.

Although the seminar schedule is already looking mighty impressive - even if we do say so ourselves - Pocket Gamer Connects Seattle is about more than the 13 conference tracks and 125 speakers across two shows.

Come join in the fun with 1,000 delegates from 500 companies - all ready to network with you. As well as the vibrant expo space and Big Indie Zone, there will also be Big Indie Pitches for mobile and PC, the Investor Connector and fringe activities such as the notorious Global Connects Party for after-hours networking.

Early Bird prices are still available, meaning you could save up to $250 - book now!

Who will you meet at Pocket Gamer Connects Seattle 2019?