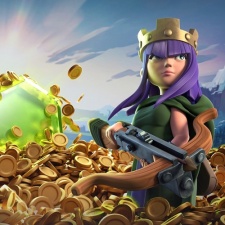 Supercell's Clash of Clans has accumulated $727 million in gross revenue from 2019.

According to Sensor Tower, this figure was enough to help push the Finnish studio back into the top five highest-grossing mobile game publishers worldwide for the year. Clash of Clans recent resurgence has been put down to the introduction of the title's $4.99 Gold Pass, which generated close to $27 million within its first week.

Furthermore, the in-app add-on contributed $66.6 million in its first month (April), representing a 58 per cent increase over the previous month.

Subsequently, Clash of Clans grossed $597 million over the following nine-month period, showing a 32 per cent growth year-over-year at $453 million.

Clash of Clans total revenue increased by 27 per cent year-over-year, with 2018 revenues coming to $572 million. This is the first time the mobile strategy game has seen its revenue grow year-over-year since 2015.

The mobile game made up an estimated 42 per cent of Supercell's overall revenue in 2019.

It's been a strong year for Supercell all around as its newest title Brawl Stars went on to generate $422 million in gross revenue from its first year,

Supercell product lead Timur Haussila will be speaking at Pocket Gamer Connects London 2020 on January 20th and 21st 2020 - get your tickets here!