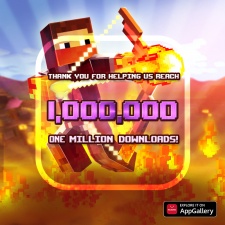 Survival Hunter Games: American Archer is the latest mobile game to reap the benefits of AppGallery’s marketing capabilities, generating over 1 million new downloads in just five months. The well-known sandbox game is part of a popular series developed by Aeria Canada Studio and is famous amongst gamers for its variety of gameplay and blocky landscape.

Players are required to fight off monsters that make their way across the map through portals, while simultaneously striving to complete missions and stay alive. Using archery skills to take-down the various opponents, each player will face a unique set of challenges. Elemental bows and arrows are also included in players’ arsenal which add another exciting in-game mechanic to the already thrilling gameplay. To win, a combination of time manipulation, battle strategy and attack skill is needed. Some of the games’ key features include the option of playing in mission mode; a fast-paced objective-driven gameplay or survival mode where gamers must continue playing for as long as possible.

With Survival Hunter Games series already gaining popularity amongst players, Aeria Canada Studios wanted further expansion of its userbase for their latest Survival Hunter Games: America Archer, and encourage downloads and eventually boost revenue. AppGallery offered just that, promoting the game across channels in a variety of different regions, including Middle East, Europe, Latin America and APAC.
With a dedicated team on hand to assist with promotion, AppGallery ensured that the game was well-received and highly valued by its users. To further boost its launch on the platform, Survival Hunter Games: American Archer also provided AppGallery gamers with the chance to claim an exclusive gift package on download.

The results speak for themselves – Survival Hunter Games: American Archer boasts of over 1 million new downloads in five months, with 50 per cent of them in response to Huawei’s global promotion of the exclusive gift package. On top of this, the game saw a 100 per cent increase in the Middle East during and after the campaign. The promotional activity also caused a significant increase in the number of players across Europe, further demonstrating AppGallery’s marketing capabilities.

Aside from cross-channel promotion, AppGallery supports its partners by offering developers more competitive technology to improve game players experience. Survival Hunter Games: American Archer integrated with both In App Purchase (IAP) Kit and HUAWEI Game services to allow for smoother in-app purchasing and the ability to tie Huawei accounts together. Overall, both kits enable an improved user experience to encourage gamers to get involved.

By taking advantage of AppGallery’s one-to-one engineer support service, the developers behind Survival Hunter were able to integrate with both the IAP Kit and Game Services seamlessly. They are also integrating with Ads Kit to continue boosting revenue.

Aeria Canada Studio is the proud creator of many world-leading mobile games and by partnering with AppGallery, is now able to continue expanding its global market. In line with the overall growth of the mobile gaming industry, the Canada-based firm is looking to continue growing at a global scale, something that AppGallery is well-placed to support. Following the successful launch of the first Survival Hunter Games: American Archer, Aeria Canada Studio released another three games on AppGallery to continue to reap the benefits of its promotional capabilities.

AppGallery – One of the top three app marketplaces globally

All applications developed in collaboration with Huawei, along with thousands of other quality apps, are available on Huawei’s open and secure app distribution platform, AppGallery. One of the top three app marketplaces globally, as of September 30, 2020, AppGallery has been used by more than 500 monthly million active users throughout more than 170 countries and regions to Huawei’s smart and innovative ecosystem. AppGallery provides users with more choice and better app discovery options, with thousands of apps across 18 categories, including news, social media, entertainment, and more.