ZeptoLab will be looking to recreate the success of Om Nom: Run 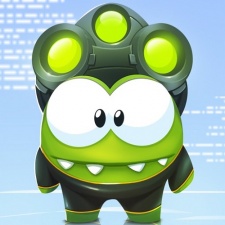 Players must fight their way to freedom by hacking robots, hiding in cardboard boxes (Metal Gear-style) to avoid detection, blasting through walls for progression, as well as utilising Om Nom's specialist hearing to escape. Both Om Nom and its hacking tools can be customised with different types of spy gear.

The game looks to have gone into soft launch sometime in September on iOS, before then debuting on Android devices with an additional 40 levels in December 2020.

Cybernom can currently be downloaded from the App Store and Google Play in the UK.

"But worry not! OmNom is a brilliant hacker. He is smart, fast and invisible. Bad guys do not stand a chance!"

No official release date has been confirmed at this time, however the studio historically launches a game shortly after its soft-launch phase, if successful.

PocketGamer.biz has reached out to ZeptoLab for more details and whether it will arrive in further territories.

ZeptoLab will be looking to recreate the early success it found with Om Nom: Run after the endless runner sprinted to five million downloads in its first month.

Head on over to our soft launch page to check out our full list of soft-launched titles, including Crash Bandicoot: On the Run, Stranger Things: Puzzle Tales, League of Legends: Wild Rift, and more.