Seasonal events, Bandicoot Pass and 70 costumes from day one 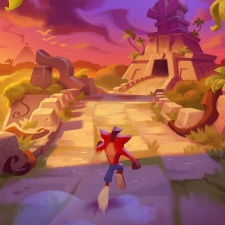 Nana Li is a senior concept artist at King and also the visual development lead on Crash Bandicoot: On the Run.

Crash Bandicoot N. Sane Trilogy was "too detailed and noisy to work with on the small mobile screen," according to King senior concept artist Nana Li.

The comment was made during a private virtual event held by King and attended by PocketGamer.biz, where information was shared on the marsupial's upcoming mobile outing.

Li continued: "We needed it to be fresher and more readable, so we pushed in a cleaner and more colourful direction. We simplified much of the detail while staying as true to the original spirit as possible. The idea was that fans should be able to pick up the game and get that instant hit of familiarity."

King looks to achieve this sense of familiarity by pulling from all of Crash's history, whether that be in the manga, a Game Boy Advance title, or on a console. All of this was considered "canon" with numerous faces being brought back from across the franchise - including Scorporilla, a gorilla-scorpion hybrid from Crash of the Titans who will serve as the runner's first boss.

Another fan-favourite character that will return is Nina Cortex (niece of Doctor Neo Cortex), as well as Tiny Tiger, a common underling who made his debut in Crash Bandicoot 2 on the original PlayStation. King went one step further and decided to go a "little bit deeper" into the history of Crash.

"We found some characters that were cut from the game - some obscure characters, like Pink Elephant that was cut from a level in [Crash] Twinsanity called 'Going Coco', "explained Crash Bandicoot: On the Run creative lead Stephen Jarrett.

"So, this character was never actually in a Crash game but we actually put Pink Elephant into Crash Bandicoot: On the Run".

On launch, Crash Bandicoot: On the Run will feature two playable characters: Crash and Coco. Alongside this, seasons and holidays will take place that will introduce new content as well as an additional 'Bandicoot Pass'. The additional purchase will earn players more goodies, such as skins and in-game currency (a free pass will be available too).

70 costumes will be available on day one with King aiming to have 200 released by the end of the year. Each one will offer different bonus properties, however, only some skins can be shared between the two marsupials, as both will receive their own exclusive selection.

Another feature that will take advantage of the themed content will be Coco's Base. This is where Crash's younger sister will repair machines and create inventions to help her older brother defeat bosses, and in turn, unlock new gameplay. King boasted that this particular hub will be full of easter eggs for fans to discover.

"I love Tawna, the way she was controlled in Crash 4," said Jarrett, when answering the possibility of new characters being added down the line.

Crash Bandicoot: on the Run will feature Time Trials. a popular mode from the mainline series, alongside a new exclusive mode for mobile: Survival Runs. Here, players will race against one another as they try to survive for the longest time to earn trophies. Additionally, players can join teams, leagues and take part in competitions to earn more rewards.

With a global launch only a few days away, one of the main priorities for the studio was making sure that the game "both ran and looked good" on all devices.

As the marsupial is traditionally known for his console experiences, it's a big ask for King to usher in fans from a different platform and convince them that On the Run is worthy of the Crash name. However, Jarrett believes the team has succeeded.

"It's something I'm really proud we achieved," he said.

"Each world offers the player new locations to explore, new music... every land has new obstacles, new mechanics, new bosses, and new gameplay, so it's incredibly important for us as the player moves through the game and unlocks these new lands, you feel this amazing sense of progression that hasn't been felt in runners before"

Crash Bandicoot: On the Run will available to download worldwide on iOS and Android devices from March 25th, 2021.

We previously spoke to Jarrett about King's pursuit to create "the Crashiest Crash game ever" and the notion of bringing the character to mobile for the first time in over a decade.