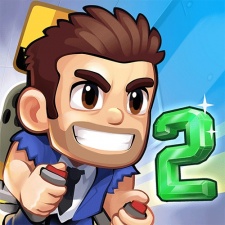 Update: Halfbrick Studios has confirmed that Jetpack Joyride 2: Bullet Rush is now available in Spain via soft launch too.

The Brisbane-based developer further confirmed to PocketGamer.biz that it is "hoping" to release the game globally in 2021.

Almost a decade on, the sequel - Jetpack Joyride 2: Bullet Rush - is now level-based and sees the return of protagonist Barry Steakfries, as he must take on Professor Brains equipped with all manner of weapons and vehicles.

Players can jump into a race, dodge multiple hazards, fly through the lab, as well as dash and rush through new laboratories with the help of infinite bullets!

Barry also possesses a life meter now too, as opposed to the one-hit-kill system in the 2011 release.

Launched in September 2011, the original Jetpack Joyride was a cult mobile hit that went on to earn more than 13 million installs within five months of release.

"Barry returns in a frantic adventure! In this case, he will have new equipment and weapons to fight new enemies and make his way through the laboratory to stop the scientists' experiments before it is too late," reads the app description.

"The evolved adventure of Jetpack Joyride with new HD graphics, new animations, new mechanics and a new way of playing."

Jetpack Joyride 2: Bullet Rush is available to download across the App Store and Google Play in Australia, Canada and New Zealand. No word of a global release date has been shared at this time.

Head on over to our soft launch page to check out 51 top games in soft launch, including Apex Legends Mobile, Diablo Immortal, Mighty Doom and more.