"Price point was secondary... and painful" 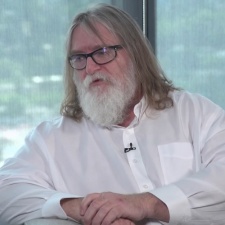 Valve president Gabe Newell discussed the price of the company's new Steam Deck with its decision said to be "critical" to the mobile space.

The conversation was part of an interview with IGN, where the Steam co-founder explained the reasoning for Valve's thinking behind entering the handheld industry at this time, and why the new device's cost was fundamental to this.

"One of the things we're testing on this is the price-performance - it's going to be one of the critical factors in the mobile space, and so we've had to be very aggressive in terms of pricing on the deck," Newell said.

Valve confirmed the Steam Deck's existence following months of speculation, with the portable handheld set to start shipping in December 2021.

"Price point was secondary... and painful but that was a critical aspect to it. But the first thing was the performance and the experience [which] was the biggest and most fundamental constraint that was driving this," Newell added.

"We don't say 'oh, we have to sell eight games for each one of these'… Our calculus is more just sort of like is this the right product and is it a great way to test out the assumption that there's a huge amount of value both to game players and game developers to extending the PC ecosystem in this direction. That's the real test more than anything else."

During the same interview, Newell mentioned that he believes the Steam Deck will sell "millions" of units. The full interview conducted by IGN can be watched below:

Pre-orders for the Steam Deck will go live later today (July 16th), though to combat scalpers, only those that have made a purchase through Steam before June 2021 will be able to reserve a device within the first 48-hours of sale.

Of course, the biggest competition to the Steam Deck will be the new Nintendo Switch (OLED model), which just had pre-orders in the US go live. We'll have to wait and see which of the two companies come out on top in terms of sales figures later this year.