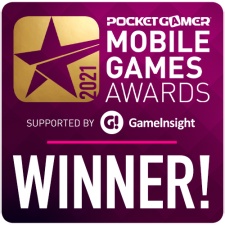 Innovation of the Year went to Niantic for its ingenious reworking of Pokémon GO for the 2020 lockdown, Pollen VC was voted Best Service Provider, and Clash Royale conquered the opposition to the Best Live Ops trophy.

As ever the event, which in this pandemic-affected year took place a little later than usual and followed a hybrid live/digital format held at London's Ham Yard Hotel, aimed to shine a spotlight on the work of the top mobile games companies over the previous year.

Further highlights from the night included the Rising Star award, shared - an event first - by Jana and Sham Al Bdour of Sakura Games, Unity continuing its Best Game Engine dominance with a fourth win in as many years, and Jam City CEO Chris DeWolfe joining the ranks of Mobile Legend.

The coveted People's Choice Award, nominated for and voted on by readers of sister-site PocketGamer.com, went to Tilting Point's SpongeBob: Krusty Cook-Off.

As you'll see by checking out all of the winners, the 22 categories represent firms spanning the whole industry, from games developers and publishers to the tools companies, service providers, support agencies, investors and recruiters, all of which contribute towards this sector being the largest and most pervasive in gaming.

The lobbying and shortlisting phases - the biggest and most complex to date - were subsequently voted on by our panel of 100-plus mobile games experts from every corner of the industry.

We're hugely grateful to everyone who took the time to submit themselves, their colleagues, company, or contemporaries, as well as everyone who attended the ceremony itself - whether in person or digitally (the video of the evening's proceedings is now live).

Additionally, we'd like to thank our main sponsor, Game Insight, together with Admix, Huawei Ads, Jam City, Scopely and Tilting Point for coming on board as category sponsors - their support helped make the event, in a particularly challenging year, a success.

And last but by no means least, our congratulations to all the finalists - it really was a hard-fought affair this year - and, of course, the heartiest of praise to the winners themselves.

More info on all things PG Mobile Games Awards, including full results, at the official website.

Has your game made the Pocket Gamer People's Choice Award 2021 finalists?