Rockstar Games rumoured to be remastering GTA trilogy for mobile 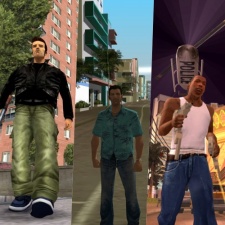 That's according to sources at Kotaku, which told the outlet that a remastered collection featuring Grand Theft Auto III, Grand Theft Auto: Vice City and Grand Theft Auto: San Andreas are in the works for a planned fall release. Alongside mobile, the trilogy will arrive on most platforms - including Nintendo Switch.

Set to be developed by Rockstar Dundee, all three titles are being remastered via Unreal Engine and will utilise a mix of "new and old graphics," with the UI being updated too. The idea behind the new remasters is that they stay fairly close to the PlayStation 2-style GTA games.

All three games will be released digitally only and will not be available to purchase separately. If successful, Rockstar then plans to remaster Red Dead Redemption, which potentially may lead to a mobile port and/or Switch version too.

Many Rockstar developed titles have made their way over to the mobile platform already, such as the three GTA games mentioned in the rumoured collection, GTA: Chinatown Wars, GTA: Liberty City Stories, Max Payne and more. Rockstar North even developed GTA: iFruit for the platform specifically as well as launching an anniversary edition of Bully for both iOS and Android in 2016.

No official release date or details have been shared yet. It was, however, noted in the report that console development looks to be the company's priority to get the games out this year, with mobile likely being moved to 2022.

It's no wonder RockStar wants to bring more games to mobile, considering that over 800 mobile games make more than $1 million every month.