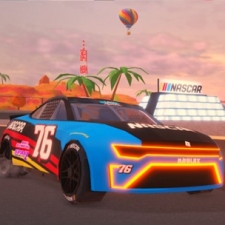 Nascar’s next-generation race car has been live on Roblox since Friday 5 November.

It features in Jailbreak, a popular cops and robbers style virtual experience, free-to-play on the Roblox platform.

Last month there was a skin contest held by Jailbreak that encouraged players to design skins of their own (or a paint scheme). It was held on Reddit and the top two skins now feature in the game.

While the others in the top five won’t be appearing in-game, there were still cash prizes.

“We’ve really begun to focus on expanding Nascar’s presence in the metaverse and engaging with the virtual community in unique and creative ways,” said Nick Rend, managing director of gaming & esports at Nascar.

“Roblox has one of the most passionate communities out there, so when we began collaborating with Jailbreak and its development team, Badimo, it only made sense to add an element of customization to the race car to get players involved and excited for this upcoming drop. Imaginations ran wild and the Roblox community created some awesome skins.”

Jailbreak became one of the fastest-growing experiences in Roblox within days of its release in 2017 and has been played more than five billion times.