Including Cube surfer and Paper.io 2 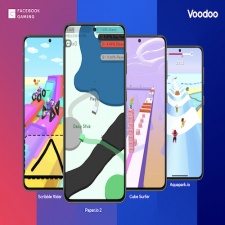 Voodoo has revealed a partnership with Facebook Gaming to bring five hypercasual games to the platform.

The partnership is aimed at boosting Voodoo’s audience outside of app marketplaces, as well as making its games more social.

Facebook Gaming has stated that over 900 million users interact with games on Facebook each month and that it is "continuing to expand" its catalogue of titles to make the platform and "even better place to play and launch games".

"With so many ways to play games instantly on Facebook Gaming, whether that be web-based HTML5, or cloud-streamed, we’re excited to build on an already amazing catalog of brilliant games," said Voodoo head of publishing Alexander Shea.

"We look forward to engaging a new audience with some of our biggest hits to date, including Aquapark.io and Cube Surfer, and hope to bring many more to Facebook Gaming’s platform in the future."

Last week, Voodoo revealed that it will invest $200 million into blockchain games and currently has 10 studios working on developing blockchain titles, with plans to create an additional 20 studios.