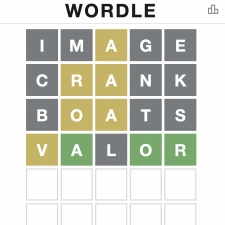 Apple has removed clones of popular online word game Wordle that have been appearing on its App Store.

Wordle, a word guessing game recently popularised by Josh Wardle, has given rise to a number of unlicensed or copycat versions of the game appearing on the App Store, quickly climbing its charts.

Many of the clone apps appearing feature different gameplay but still utilise the Wordle name in attempts to capitalise on its quickfound success.

On January 11th, one developer documented the speedy climb of their own copycat title on Twitter, which attracted significant criticism and seemingly initiated the removal of the app and others from its storefront within hours of this backlash.

Apple confirmed to PocketGamer.biz that it has removed several clone versions of Wordle from its App Store.

The tech giant outlines its policy on copycat apps and games in its App Store Review guidelines: "Come up with your own ideas. We know you have them, so make yours come to life. Don’t simply copy the latest popular app on the App Store, or make some minor changes to another app’s name or UI and pass it off as your own. In addition to risking an intellectual property infringement claim, it makes the App Store harder to navigate and just isn’t fair to your fellow developers."

Several Wordle clones drew heavy criticism due to the presence of in-app purchases and in-app advertising, which are not present in the eponymous title.

Wardle has stated that there are no future plans to monetise the web game or create an app version.

In other removal news, Roblox recently pulled LuoBuLesi, the Chinese version of its app, from app marketplaces in China and is intent on rebuilding it.