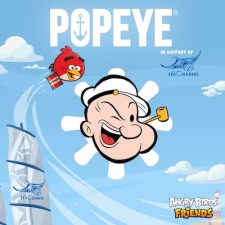 Heini Kaihu is the head of HR at Finnish firm Rovio Entertainment.

Rovio has partnered with Popeye and non-profit The SeaCleaners to promote awareness about cleaning plastics out of the ocean.

The partnership will include a week-long tournament in Angry Birds Friends that will teach players about The SeaCleaners via in-game messages, such as information about their sustainable sailboat, Manta, which was created to "swallow up" and process plastic pollution.

The in-game event, running from Janaury 31 to February 6, will partner the Angry Birds and Popeye as they stop the pigs and Bluto from polluting the sea with plastic.

Rovio has historically partnered with companies that promote environmental sustainability, such as a partnership with Kahoot to educate users on climate change.

"How we deal with our waste is one of the problems that will define our future," said Rovio chief sustainability officer Heini Kaihu.

"The only way we’re going to solve these issues is by spreading knowledge, and luckily we have the Angry Birds and Popeye, who can do that in a way that is fun also."

The SeaCleaners president Yvan Bourgnon added: "It takes muscles, brain, and determination to battle plastic pollution. I think we have the perfect dream team to achieve this with Angry Birds and Popeye, two iconic brands with powerful fan communities around the world ready to take action for a good cause!"

Last November, Pixel Federation joined the Playing for the Planet Alliance and revealed it will host in-game events across its portfolio to encourage action against deforestation and support ocean cleaning.