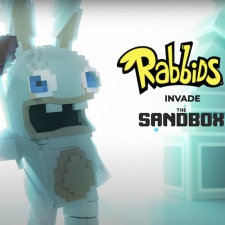 Animoca Brands subsidiary The Sandbox has revealed a partnership with Ubisoft to bring the Rabbids to its metaverse platform.

As part of the partnership, Ubisoft will have its own land within The Sandbox metaverse which it will use to bring interactive experiences, voxel characters, and items into the gaming metaverse.

Additionally, Ubisoft will introduce "game IP elements" in the metaverse, suggesting further Ubisoft characters and franchises may appear in the future. The companies have confirmed that work to bring the Rabbids into The Sandbox is currently in progress.

"The Sandbox is an obvious new fun playground addition to the long list of Rabbids world invasions, and a great opportunity for Ubisoft to experiment a metaverse experience for its brands," said Ubisoft senior manager of new business and partnerships Guillaume Mammi.

Ubisoft first revealed its intentions of entering the blockchain space in December 2021 with the unveiling of its NFT platform Ubisoft Quartz. The firm’s partnership with The Sandbox further solidifies its aspirations of remaining a worthy player at the forefront of the blockchain and metaverse.

The Sandbox VP of global partnerships Bertran Levy added: "I’m very proud that Ubisoft, one of the most innovative gaming brands that’s globally known for creating numerous iconic game franchises, has chosen The Sandbox metaverse for its very first move into this new kind of interactive experience."

The new partnership follows an announcement from the company at the start of the year that it had signed several partnerships with leading Hong Kong companies and investors to create Mega City metaverse, based on Hong Kong.