One billion downloads achieved in the past 9 months 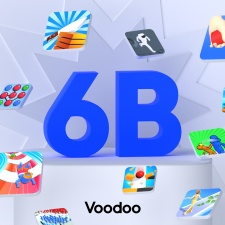 French hypercasual publisher Voodoo has revealed that it has surpassed six billion downloads across its games and apps.

This latest milestone follows the company’s previous achievement of five billion downloads, which was achieved in nine months ago in May 2021.

Voodoo’s games portfolio consists of over 200 games and ranges from hypercasual, hybrid casual, and more. A number of these, like Helix Jump and Aquapark.io are among the world’s most downloaded mobile titles, with over 800 million and 270 million downloads respectively.

The company claims that by using downloads as a metric this makes them the top mobile publisher in the world.

The company announced in November 2021 that it would double down on hype and hybrid-casual with new ideation frameworks this year, and with more events to support its studios’ success.

"Reaching six billion downloads is a great way to kick start a fantastic year for us here at Voodoo," said Voodoo head of publishing Alexander Shea.

"We’re delighted to be working with hyper-casual’s most talented studios and congratulations to all those who have contributed to hitting this milestone."

In December, Voodoo revealed plans to invest $200 million in blockchain games through the funding of studios with "interesting ideas".