Edd Coates, founder of Game UI Database, brings Sonic, Joker, and Link to his panel discussing the aesthetics and function of user interfaces 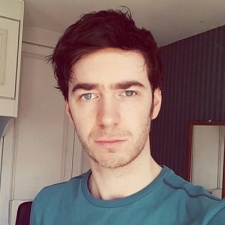 UI (user interface) artist and founder of Game UI Database, Edd Coates, posits in his Pocket Gamer Connects London panel that the UI is one of the most important yet misunderstood elements in game development, and its transformative potential is yet to be fully realised by many studios.

In the panel, How Powerful UI Can Transform Your Game, Coates argues that widely recognised instances can often obscure the weightiness behind them – such as, what is a tutorial, and details some of the existing permutations: floating text boxes or embedded videos, among others.

“Game UI fulfils three purposes – it helps the player interact, displays complex guidance, and is the visual identity and branding. Interaction plus information plus art.”

Coates offered three examples of preferred UI: first, the modest minimalism in Breath of the Wild. “The UI is set dressing to navigating the menus. Nothing more.”

Next, he showed Persona 5, first without the UI and after, illustrating the transformative influence. “This game wants you to recognise the UI. It wants you to identify this as what Persona 5 is [...] UI has the power to hijack the game’s visual identity”, and can tie into branding and marketing, as in the example of Persona 5 merchandising and even its appearances in other games.

Coates also presented a more irregular example: Sonic Forces, “which is based on Russia constructivism. Bet you didn’t wake up and think you’d hear Sonic compared to Russian propaganda,” but it is embedded in the themes and plot of Sonic Forces – Sonic being sent into a future where the world is conquered by Eggman – successfully.

But if UI doesn’t work well, “it’s useless”. Elegant implementation can bleed into user patterns, such as in-game livery that is also informative, and colour contrast to indicate important interactions; the classic example being the red barrel or boss weakspot.

Coates summarises that the flexibility of UI allows it to become more noticeable than the game itself and help the player reach the right decisions, but unattractive UI will "make your product look cheap and poorly-made".

Video interview: Data.ai on the rise and continuation of mobile spending