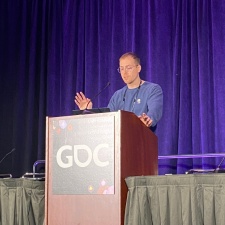 Supercell artist John Cipriani started with something of a joke familiar to many gamee artists: “IP actually stands for ‘inherited problems’.”

The initial rules for Clash of Clans, which remain, insisted this was a world with no pain or evil characters, and this is reflected in the original look for the game: a more childish and toylike. Refining the look required more consideration of playfulness and seriousness.

“We try to create memorable characters,” with importance on ensuring characters have a clean appearance that does not include too much visual elements to memorise. The key was simplification and familiarity.

This is what led to the central theme for the Clash IP world: “fantasy with a pop culture twist”.

But it is difficult to imbue characters without voices and viewed in miniature on mobile phones. Cipriana said marketing was the opportunity to provide additional personality to the Clash characters, lending more character traits in advertisement such as the 2015 Super Bowl advert.

Similarly, creators from The Simpsons approached Supercell with the view of creating a cartoon TV show, which would in turn inspire further developments and additions to the game. “Every piece of content released gives you the opportunity to reapproach your IP and build on it.”

Supercell’s three beta games, Clash Mini, Clash Quest, and Clash Heroes, are being worked on separate teams and offices but within the same IP. This gave the teams opportunities to expand the IP, but keeping what worked: expanding habitats and families of characters.

Cipriani noted that even more outlandish characters, such as Wave Master, had to strictly meet the criteria of what makes Clash characters familiar. “Learn the fundamentals, then break them. Otherwise, you might as well store your IP in a museum. IP decisions should ultimately support the product you’re trying to make stronger.”

Supercell: It takes more than one great idea to make a successful game