Hypercasual found to have the highest initial opt-in rate 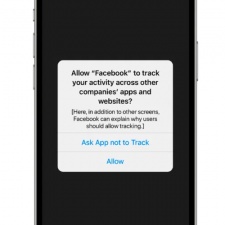 One year on from Apple implementing its App Tracking Transparency (ATT) framework, the AppsFlyer report, ATT – 1 year on, analyses iOS and Android user data to suggest when opt-in rates are highest.

Whilst 80 per cent of apps now implement a prompt for ATT, the rate in mobile games is even higher at 91 per cent. Additionally, the opt-in rate is also higher within games, albeit marginal in most cases.

Both Brazil and France see higher opt-in rates for mobile games – 49 and 58 per cent, respectively. However, the report concludes France to be "an anomaly in western Europe", with opt-in for non-gaming apps was higher (54 per cent).

AppsFlyer also notes in its report that the consent rate is higher in developing regions such as southeast Asia, likely due to the fact that developed markets have a stronger awareness of data privacy and security.

Analysis shows consent to be at its highest when users first launch an app. Among those who do not accept the initial opt-in request, showing them a post-ATT notification outlining the benefits of opting in resulted in a 30 per cent increase in uptake after seven days.

However, the results for delayed opt-in for gaming apps are significantly lower, at 17 per cent.

In hypercasual games, the sooner the ATT prompt comes after install, the higher the opt-in rate. One minute into the game, more than half accepted the request. By an hour, this dropped to 45 per cent, and by two hours, 38 per cent.

The most downloaded hypercasual game in Q1 2022 was Homa Games' Merge Master - Dinosaur Fusion, with the highest uptake being in India and Brazil.

The casual genre follows a similar opt-in pattern, dropping from exactly half at the first minute to 38 per cent after two hours.

This trend was found to apply to all analysed genres apart from hardcore games, which buck the curve and peak more than an hour after install. Again, the initial opt-in rate is 50 per cent, but AppsFlyer found it to rise to 56 per cent after an hour before plummeting to 26 per cent after two.

As a whole, more than half of users prompted in a mobile game will opt-in during the first minute, but this drops steadily until levelling off at 30 per cent on day two.

ATT and its extensive impact on monetisation remains a focal topic in mobile gaming. Recently, we spoke with Rovio CEO Alex Pelletier-Normand about the initial uncertainties and subsequent confidence surrounding ATT.