Google meets now allows attendees to play UNO! during meetings, is it just an interesting way to waste time or an ingenious addition? 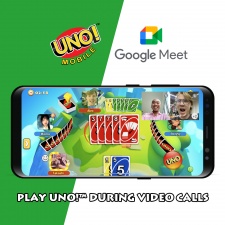 Mattel163 has announced that their game UNO! Mobile is playable not just as a standalone game now on Android and other mobile devices, but now as part of the Google Meets app. According to their release, users simply need to select the ‘activities’ tab on their devices and they, and other attendees, will be able to play a group session of the popular card game. The addition is essentially the same version of Mattel163’s adaptation of the card game, however it’s now natively playable via Google’s video call app no matter whether attendees have downloaded it or not.

So why put UNO into the Google Meets App? CEO of Mattel163 Amy Huang gave a hint, saying “Video calling is people's go-to way to keep in touch with friends, family and friends. Creating accessible opportunities for connection and entertainment through play is something we strive for at Mattel163.” We can note the main focus in that statement isn’t necessarily the business community, but the casual users of Google Meets who utilise it for social functions.

Although some may be concerned that people in Google meetings will end up just playing a card game instead of discussing more important business matters, the proposition behind adding UNO to the app does make sense. According to the release, the aim is, “To build more cross-app experiences that ignite a sense of global community with a new way to connect.”

Essentially, we can guess that Google Meets wants to expand its purpose beyond simply video conferencing or business use. During the pandemic, many people will likely remember video calls with friends or family, often with the intent to play games and socialise. Some may have found it difficult, especially if they’re unused to technology in the first place. By adding native support for a popular Mattel property, and making it easily usable via mobile devices, virtually anyone who can download and use the app can play with no extra effort. Aside from that, Google Meet may be testing the waters for adding more entertainment options to their app to encourage social use, as popular messaging service Discord has done with the addition of a bot to allow multiple users to watch Netflix together at the same time.

There’s also the potential to sell the addition as an icebreaker or for team building exercises. Making it easy and convenient for any user to participate. Integrating games into apps not commonly used for that purpose has been something another company, Netflix, have been heavily pursuing with their Netflix Games initiative. Google clearly wants to push the ‘social’ aspect of their app and make it attractive not just to their usual audience, but also to those who just want to have fun with friends and family.

Mattel163's Amy Huang on Phase 10, the technology revolution, and return to live events in 2022

Amy Huang, CEO of Mattel163 on fostering diversity in mobile esports "Every innovation starts with inclusion."