The game has failed to meet Space Ape Games’ standards 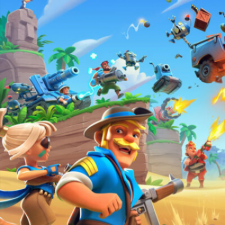 Space Ape Games has announced on Reddit that it’s ending the development of Boom Beach: Frontlines after a year in soft-launch.

“We always set very high standards for our games at Space Ape, as our goal is to make the best games, played by many and enjoyed for years,” said a spokesperson for the company on Reddit.

Even with all our efforts over the past year – introducing major features, redesigning progression, balancing the core gameplay, and much more – we felt that Boom Beach: Frontlines was still not reaching the expectations we had set for it.”

The game will go on a short maintenance break on November 28, and will be delisted from app stores on November 29. From December 1, the premium beach pass will be made free on the in-game store, before the servers are shut down on January 16.

Players can transfer any gems purchased within the game to other titles in Space ape’s portfolio, including Beatstar,Rival Kingdoms: Ruination, and Fastlane: Road to Revenge.

Despite its evident inability to live up to the hype, Boom Beach: Frontlines saw massive interest in its early days, achieving more than a million pre-registered users within 48 hours and quickly reaching the number one spot on Google’s free charts. However, the game has struggled to maintain long-term retention. In the past thirty days, the game has achieved 5 thousand downloads and generated $20 thousand in revenue, according to Appmagic data. Italy proved to be a key market for the game, generating 33 percent of revenue and 64 percent of downloads.

It appears that the company is doubling down on the titles which are proving the most successful, such as Beatstar, which recently had its biggest-ever event in a collaboration with rapper Eminem.

We have approached Space Ape Games for further comment.

Earlier this year, we listed Space Ape Games as one of the top mobile game makers of 2022.