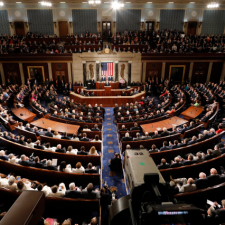 Members of Congress have signalled their intent to address the rise of white supremacist ideology in gaming, reports Axios. A letter, penned by Democratic senators such as Katie Porter and Lori Trahan, was sent to various publishers last week, and asked for information on how they respond to reports of extremist behaviour in online gaming communities.

This action comes in the wake of a recent report from the Anti-Defamation League (ADL), which found a rise in extremism in gaming communities.

"We know that online games, like the ones you create, are widely used spaces where millions of people overwhelmingly report experiencing positive social behaviours. However, they are also spaces where hate, harassment, and extremism can proliferate, and we are concerned about the total volume as well as the increase in player reports of these negative encounters," reads the letter, which was sent to developers including Activision Blizzard, Tencent, and Sony.

"Given the rise of extremism—especially white supremacist ideology—around the world, it is important that online video game developers work to stop the spread of harassment and extremist ideologies that proliferate on their platforms."

According to ADL’s report, 77 percent of adults and 66 percent of teens have reported being harassed in online games this year, compared to 71 percent and 60 percent in 2021, showing that harassment is on the rise. The report also estimates that 2.3 million teenaged players have been exposed to white extremist ideology in games, including in popular titles such as Call of Duty and Apex Legends and metaverse platforms like Roblox. The ease of communicating with new people and issues regarding censorship can make policing these platforms for objectionable content difficult, unless specific complaints are raised.

"Online Multiplayer Games are more than media and entertainment outlets–they are social spaces where people of all ages connect through concerts, protests, conversations, and more," said ADL CEO Jonathan Greenblatt in a statement to Axios. "Sadly though, ADL research has shown for the fourth year in a row that these spaces are being increasingly filled with hate and harassment.”

Recently, the Iranian government banned Clash of Clans due to concerns that protestors were utilising the in-game chat feature to organise.