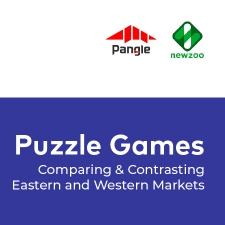 The Mobile Game Genre Report is now available, the first of several reports exploring genres of mobile games by Pangle and Newzoo.

They deep-dive into key differences between the top-performing mobile games in the US, UK, Japan and South Korea. The report explores these differences in game design, user acquisition, retention and monetisation strategies.

This first report focuses on puzzle games and the contrast between eastern and western markets. It compares demographics and consumer preferences in four key markets.

Subsequent reports will focus on role-playing and arcade games.

In 2021, 94% of gamers play on a mobile device, making mobile the biggest gaming platform (by number of players) across the East and West, thanks to the platform’s accessibility.

What’s more, mobile is also the largest gaming segment by revenue. Newzoo forecasts that the mobile gaming market will generate $90.7 billion in consumer spending in 2021 (excluding ad revenue), growing +4.4% year on year. Nearly 64% of the $90.7 billion will be generated by the Asia-Pacific regions.

America is the world’s largest mobile puzzle games market in terms of revenue, spending $2 billion on puzzle games in 2020 and accounting for 29% of the global total in mobile games as a whole that year. Japan is the second-largest and China the third-largest market for puzzle games, by revenue.

Classic Match-3 games are the top-performing puzzle subgenre in both East and West.

The monetisation mixture of IAP, IAA and subscription has become increasingly common in the puzzle space.

94% of gamers play on a mobile device, making mobile the biggest gaming platform.

However, compared to popular puzzle games in the West, Japanese titles focus more on IAP, usually featuring a deeper economy. This is thanks to the focus on character collection, progression and gacha mechanics.

During the early stage of video games in the 1980s, most classic games were puzzle games with the core gameplay revolving around challenging players’ problem-solving skills.

Many of these classic puzzle gameplays still influence today’s games.

The first game is recognized to be Shariki, a 1994 ball-matching game, but the genre gained mainstream attention with the arrival of Bejeweled, the 2001 PopCap Games version for PC browsers.

With the rising popularity of smartphones in the late 2000s, puzzle games were among the first genres to migrate to the platform. Smartphones broke hardware boundaries and enabled different game mechanics such as physics-based elements.

One of the most well-known examples is Angry Birds (2009). In 2012, King launched Candy Crush Saga, a F2P Match-3 game that remains one of the most popular titles in the West.

Many “forever” puzzle mobile franchises had an earlier start on other platforms, and thus when launched on mobile, there was already an audience that recognised the name. For example, Candy Crush Saga and Cookie Jam were first launched on Facebook as browser games.

Early Western franchises leveraged Facebook invites to encourage users to bring friends to games, while Japan would take advantage of LINE. Puzzle games show to be more popular among female audiences and skew younger in the East.

IP collaboration is another direction that puzzle game publishers are exploring.

Short-term leaderboards and ranking systems with friends or strangers, including team-based leaderboards, constantly attract players back to the game.

Pangle is the go-to place for monetising apps, attracting users, and pushing boundaries of creativity. Established as the leading mobile advertising platform in Asia, Pangle enables global
app developers to maximise earnings through exclusive TikTok For Business demand in APAC, MENA, CEE and LATAM, and advertisers to reach out to a massive audience via a premium app network.

The full Mobile Game Genre Report which contains detailed information on a wide range of games, genres and markets, is available to download now.

You can find and download the full report here.