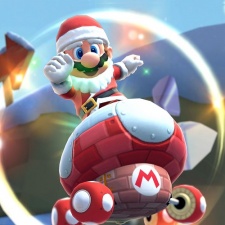 Mario Kart Tour downloads have begun to slow down as the game reaches its third month of being live but revenue performance shows that Nintendo has a reason to be optimistic.

Launched on September 25th, Mario Kart Tour raced to an estimated 124 million downloads within its first month, according to Sensor Tower data.

Since then numbers have dwindled, and in the seven weeks following the game has only accumulated another 17 million, an increase of 11 per cent.

Though low, downloads are not all that crucial as the game’s revenue continues to grow from its month one result of $37 million to the now approximately $67 million.

Nintendo and developers DeNA have continued with various updates, such as a Halloween and Winter theme adding new cosmetics and tracks, helping to keep players engaged.

Otherwise, the implementation of a multiplayer element has been confirmed to be on the horizon - something that has proven highly popular and many would consider is the core component of what makes a Mario Kart.

Arriving in beta form as part of its Gold Pass (a $4.99 subscription fee), the model is exactly what’s needed to either reintroduce players or bring in newcomers that were never interested in a single-player Mario Kart. Competition is key.

Though while not critically popular, the subscription model appears to be succeeding. So much so, Nintendo has merged the monetisation structure into Animal Crossing: Pocket Camp.

Numbers analysed reflect that the approach appears to be working for those players invested in the ecosystem.

After the initial first 30 days, Mario Kart Tour’s revenue per download has increased by nearly 81 per cent, going from $0.26 to $0.46, something a number of Nintendo’s mobile outings have failed to achieve.

The full list of revenue per download across all Nintendo mobile titles as of December 13th, 2019 can be seen below:

After only two months, Mario Kart Tour is showing great acceleration and setting itself up for strong stability as it heads into the New Year.

Though the likes of Fire Emblem Heroes are still miles ahead - RPGs are easier to monetise - over time, Animal Crossing looks beatable.