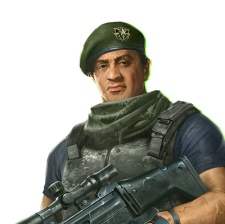 Although the buzz from the mobile 4X genre has dropped from the high days of Mobile Strike’s Super Bowl advert, it remains one of the most lucrative parts of the mobile gaming ecosystem.

But it’s also one of the most competitive.

There are dozens of live games, each happy to spend big to acquire the sort of users who can drop thousands of dollars to maximise their experience.

That makes it a high-risk, high-reward opportunity for new entrants, such as Beyond Games, which recently launched the Sylvester Stallone-fronted Battle Strike Force.

We caught up with CEO Aron Beierschmitt to find out more about how he expects to succeed in such an environment.

PocketGamer.biz: Can you provide some background on Beyond Games and what your vision is?

Aron Beierschmitt: Beyond Games was founded in 2013 and is now made up of 49 people across three offices globally.

Our vision is to introduce the core social elements of 4X strategy to a wider midcore audience. Ultimately we build social networks with game loops at their core.

While there have been some successful 4X games, the shine has come off the genre in recent times. Why did you think it was still a good opportunity?

The genre has largely been stagnant over the last five years but continues to produce strong revenue growth.

We felt there was an opportunity to layer in mid-core systems (ie. Hero Collection, PvE Campaign Bases, etc) as well as an active battle loop on top of traditional 4X base-building and map tactics.

What was the inspiration for Battle Strike Force and why do you think it stands out compared to the competition?

We knew we wanted to build a unique IP around Sylvester Stallone. The overall narrative was something we spent months crafting to ensure we had something cohesive for players to latch onto.

We knew we wanted to build a unique IP around Sylvester Stallone.

Creating the conflict between the Resistance (led by Sly's character Jasper Reese) and the Iron Order gave us the ability to weave a deeper narrative than our competition.

In the end, Battle Strike Force takes elements of GI Joe and X-Men and combines them in a unique Post WW1 alternative reality.

How did Sylvester Stallone get involved?

We sought Stallone out very early in the process. Our pitch was focused on how we were differentiating ourselves from Mobile Strike given his friendly rivalry with Arnold Schwarzenegger.

An early art demo and storyboard around his in-game Character Jasper Reese convinced him we were the right group to bet on.

How long was development and did you have to overcome any significant challenges?

Development on Battle Strike Force took 2.5 years and was quite the rollercoaster ride for the team.

One of the most significant challenges was executing an early design pivot that ultimately led to the game we have today.

During the course of the pivot we needed to refactor the battle code in its entirety. 5 engineers locked themselves in a conference room and we started to refer to them as the "Battle Strike Force". We liked the name enough to make it the official title!

The game recently launched so what’s the initial reaction been like?

The initial reaction has been solid with support from both Stallone and Apple. We are taking a slow and steady approach to growth while we evaluate various financing options.

We've got an aggressive roadmap through 2020 with a specific focus on building out our elder game content.

It's great to have our product out in the wild and finally seeing steady growth. We've got a tight roadmap through the end of year and plan to come out swinging in 2020.

The 4X sector sees high ARPUs driving high UA costs so as a new entrant what’s your plan to compete with games that already have strong communities?

At the end of the day 4X is an incredibly competitive genre. Our high fidelity graphics help differentiate us early on with what player's see in our ads actually existing in the game itself.

The slower onramp to core 4X loop also ensures a wider funnel of initial players lowering our UA costs relative to the competition.

Can you tell us anything about your future plans?

We've got an aggressive roadmap through 2020 with a specific focus on building out our elder game content while continuing to smooth the onramp from early to mid-game.

Most of the features we are now building have never been seen in the genre. We continue to build off our unique foundation and introduce fresh content to a player community that's grown tired of the status quo.

You can find out more about Battle Strike Force via its website.

Tilting Point fleshes out its monetisation tools with Gondola acquisition