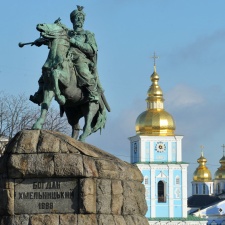 Every fortnight(-ish), we publish our editor’s column, the PocketGamer.biz View. This is that column, but it felt grossly inappropriate to headline it as such because, right now, our voice is far from the most important.

This week, you’ll see comments from Ukrainian studios and teams, celebrations of their accomplishments and releases, updates over the last two days, and opportunities to show your support.

We're a peaceful nation, and in all the years since we gained our independence, we've never attacked or threatened anyone.

Because of this situation, our work will be impacted and our lives can be destroyed.

Frogwares is a Ukrainian studio headquartered in Kiev, best known for the Sinking City and the Adventures of Sherlock Holmes series, the latter of which has sold over seven million copies (2017 figures). Frogwares' many tiltes are available on Steam.

Frogwares provides daily updates on its Twitter feed, and asks PocketGamer.biz readers to remain engaged and informed, and provide what support they can.

Dear friends, as some of you may know, we are based in Ukraine, today our country was attacked by Russia. They declared a War and currently attacking our citizens.

We will not able to answer or help you that much with the game atm.

Love and peace for you all!

Ukrainian studio, Sengi Games, is the developer of the upcoming The Serpent Rogue, an alchemy-fuelled action adventure game set in a medieval fantasy world, published by Team 17. The Serpent Rogue can be wishlisted on Steam, where you can also download a demo.

Founded in 2012, Kviv-based Vostok Games is best known for its battle royale title, Fear the Wolves, and F2P shooter, Survivarium, both of which are available on Steam. Vostok Games has also began work on a new, unannounced project.

Weeks ago we ran through possible scenarios in Ukraine that could impact the well being of @tinyBuild team members and partners.

We accelerated relocation procedures, offered support for moving to the Western part of the country, and prepared for different scenarios.

Lviv-based Hologryph joined indie publisher tinyBuild in 2020 after working on the Hello Neighbor multiplayer expansion, Secret Neighbor. tinyBuild revealed that Hologryph is working on an original IP release for PS5 and Xbox Series.

Gameloft's Ukraine studios – Kharkov, founded in 2007, and Lviv, 2014 – specialise in casual games and live games evolution and production and QA, respectively. They have been responsible for some of Gameloft's most noteworthy franchises including Asphalt Extreme and Order and Chaos.

Spurred by a desire to protect staff wellbeing, 4A Games was founded in Kviv in 2006. Now based in Malta and Ukraine, 4A is the developer of multiple entries in the renowned FPS franchise, Metro, available on Steam.

11 bit studios, based in Poland, has announced all profits from its hit title, This War of Mine, across all stores and platforms, over the next six days will be donated to the Ukrainian Red Cross.

We’ve been receiving many requests from our players and partners regarding our Persha Studio / Wargaming Kyiv employees.

Here is the most recent update. pic.twitter.com/zSmFW70xxr

World of Tanks developer, Wargaming, was founded in 1998 but switched to F2P games in 2009, marking the company's most successful era. The company's Ukraine division, Wargaming Kyiv, was acquired in 2011 and is the primary development hub for World of Warplanes, available on Steam.

Today has been a dark day for the entire Europe.

EGDF condemns the Putin regime’s war against Ukraine and calls for international support for Ukraine, its people and the Ukrainian game developer community.

The European Games Developer Federation has explicitly condemned Russia's invasion of Ukraine and calls for greater international support for Ukraine and its game developer community. Their full comments can be read here.

You can also donate directly to the Ukrainian Red Cross through the following links: