"Developers are driving customers to the storefronts but not vice versa" 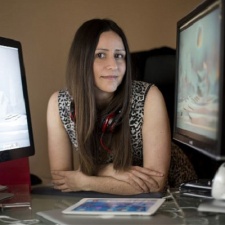 Jennifer Schneidereit is the co-founder and game creator of British-based indie studio Nyamyam.

Though nothing is guaranteed, joining a studio can be seen as a safer way to ensure job security, so venturing out from this to create your own studio is always a brave but risky move.

British-based indie studio Nyamyam was founded in late 2010 by Jennifer Schneidereit and Phil Tossell, after the pair crossed paths while working on Kinect Sports at Rare. The duo has grown the studio since then, releasing the atmospheric adventure title Tengami in 2014, going on to receive numerous nominations and awards.

The studio’s latest release arrives in the form of the comedic story-driven Astrologaster. Set in London during the 1500s, the game shows a new direction for the company, but one that has begun to bring in similar praise to its predecessor.

As part of our Indie Spotlight series, we spoke with co-founder and creator Jennifer Schneidereit about her transition into indie games development after beginning her career working on triple-A games.

Jennifer Schneidereit: I started out my career as a programmer and game designer working on triple-A in Japan and the UK.

Five years into my career Apple released the first iPad and I saw this as an opportunity to bring high-quality games to the mobile space. I quit my job a few months later and founded my independent studio Nyamyam.

I make quite unconventional games and it’s a struggle to get funding for those.

I usually start out by making a ‘to do’ list that I would like to get done during the day. Then I hop on a Skype call with my technical director Phil who lives in the Philippines. We discuss the state of our current project, completed and outstanding tasks, and immediate next steps.

Then we talk about whether there are there any fires, like critical bugs on our released games that need putting out. I spend the rest of the day doing a mix of game design and creative direction, with the occasional look at our budget and schedule.

The biggest challenge is to make the financial side of things work. I make quite unconventional games and it’s a struggle to get funding for those.

Success as an indie for me is being able to pay collaborators, recouping investment in a game and being able to make more games. Success is also enjoying the process of making a game. Life is too short to be miserable at work.

In my opinion, the mobile market is very difficult for indies right now. More than ever you need money to make money.

Being featured by the platform holders doesn’t have the same impact it used to have a few years ago, which means you are left on your own in figuring out on your how to reach your audience.

In order to have good marketing and create audience awareness indies need money. Developers are driving customers to the storefronts but not vice versa.

Being featured by the platform holders doesn’t have the same impact it used to have a few years ago, which means you are left on your own in figuring out on your how to reach your audience.

Could you tell us about the studio’s most recent game?

A few weeks ago we released Astrologaster, a comedy game set in Shakespeare’s London. Players guide real-historical figure Doctor Simon Forman, who helps treat and diagnose his patients through the method of astrology. The player makes story-choices via an astrological chart.

There are short and long-term consequences to the player's decisions that all result in hilarity. The game is quite musical and each patient has their own song.

We are going to spend the next few weeks supporting Astrologaster and after that I will work on pitches and prototypes for new games. I am trying to up my business-development game and look into investment for the company.

A musical game that blends The Sound of Music and Alice in Wonderland.

Define up-front and on a per project basis what ‘making it’ means. Not all game concepts have the same commercial appeal. That is totally fine if you are not counting on the title generating a lot of revenue.

Keep checking in with your collaborators that you all have the same definition of success. Define this on a per-project and company level.

Work out processes that might help you reach your goals and keep experimenting with them until something sticks.