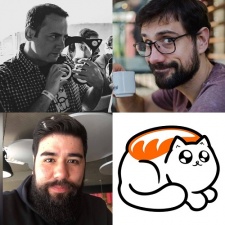 This week, we spoke to Cat Nigiri co-founders Nando Guimaraes, Marcello Lima, and Caio Lopez regarding the studio's inception and how the trio are managing to run the studio alongside full-time jobs.

Nando Guimaraes: The studio came into existence while creating Dino Palooza, an action-packed Tower Defence mobile game with dinosaurs – today, it's known as Dino Zone. We needed a business ID and a name.

Marcello Lima: First thing is to wake up, prepare some coffee, take a shower, and connect with teammates on Discord. Nothing has really changed since the pandemic has begun.

Success is changing people's lives with our games in the same as our childhood games changed ours.

Nando Guimaraes: The biggest challenge for any developer is always trying to find funding to create games - especially in countries in South America and others not as developed in the world. Gladly, we found GTR, an amazing group of people that not only helped us with finance but also made us connect with several different people in the worldwide game development industry. We also managed to secure government funding for Keen: One Girl Army.

We confess it's not the sort of investment we would have liked since it comes with too much bureaucracy and a hindering back-office demand for the paperwork needed (not counting the fact that we received nearly half of the value we have been initially selected due to arbitrary decisions).

At that time though, in a country such as Brazil where investors were shy to take an opportunity to win the market, and where money was much more valued for speculation in high-interest rates, that was one of the only ways to secure the team would get paid and the game would be released.

The third most challenging problem we faced was releasing our games on Nintendo Switch. Back then, Nintendo wasn't closing deals with Brazilian developers so we had to go to the US during PAX East and West to try and get them to sell us a devkit.

Without success there, we flew to Tokyo Game Show to showcase Keen at the Indie Area and learned that only with a Japanese publisher could we make it happen. We were lucky to find the folks at Phoenixx, Inx and therefore returned to Japan during BitSummit Vol. 6 to secure the deal.

Marcello Lima: Success is changing people's lives with our games in the same as our childhood games changed ours.

Nando Guimaraes: Otherwise, it's being able to make a living for ourselves and the studio by selling the games we enjoy creating.

Nando Guimaraes: Everyone at Cat Nigiri has day jobs, working for other larger companies. So, being an indie at this moment is especially challenging. There's not as much investment for indie games out there and competition is hugely fierce. No platform that has solely focused on indie titles has yet to succeed. We do have high hopes for Google Stadia and, more importantly, Apple Arcade.

Could you tell us about Keen: One Girl Army and why the game felt right for mobile?

Caio Lopez: Keen was made for mobile from the get-go. It wound up feeling great for console and PC as well, but the main concern we had since the beginning was to make a game that was absolutely comfortable to play on touch screens, without relying on virtual joysticks or any other less-than-optimal solution for input.

I’d say the game '2048' led the way for us to know what kind of controls felt good for that project.

I'd say the game '2048' led the way for us to know what kind of controls felt good for that project. Now that we knew the input and the game genres we wanted to experiment with, we decided to make it an adventure game that would fuse tactical combat and puzzle-solving, while having a bit of Zelda's dungeon exploration thrown in.

Marcello Lima: The direction of the main story. We wanted to deliver an experience of a saga with an ending and we thought premium was a much better fit. Besides, as a small studio, we don't have all the resources needed to develop the amount of content necessary for a free-to-play title.

Marcello Lima: Work for us is the same because we were all working remotely before Covid-19 began. However, our personal lives have obviously changed a lot. Not being able to go outside and meet our family and friends is getting harder every day and we also miss events such as PAX, GDC, Gamescom, and Pocket Gamer Connects parties.

Nando Guimaraes: We are looking forward to listening to player feedback on Keen: One Girl Army and use those insights moving forward with a new project we have in mind for the same setting.

Marcello Lima: Right now, if we had the option, an open-world sequel for Keen: One Girl Army.

Nando Guimaraes: Making it as an indie is the hardest thing you'll probably do in your life. It will build you up and prepare you for the market, whichever way it goes. Stay true to yourself, keep making games, but please don't try to punch the wall down if there's a door. You just have to figure out how to open it.