Excitement about hybrid genres, including FPS and survival. 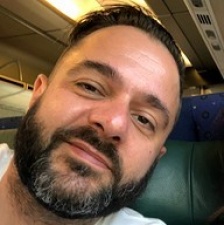 Daniel Persson, VP of mobile, chuckles as I give my preamble to a question about whether Coffee Stain’s new mobile division, Coffee Stain Malmö, is investigating blockchain gaming and NFTs. It isn’t mean-spirited or derisive, more the chuckle of someone who recognises the weightiness of blockchain discourse and has reached a succinct, conclusive stance.

"We are absolutely not. We really want to make great games and ensure Coffee Stain has a strong mobile presence, so it’s not something we’re thinking about or exploring right now."

It’s the briefest and most definitive answer during our talk, which spans Malmö’s games education heritage, Coffee Stain’s Goat Simulator success, and the saturation and opportunities of mobile genres. But Persson’s level-headed responses lend a casual confidence that upends the most complex questions. Why launch a mobile studio in a volatile, pre-blockchain, post-IDFA world simply becomes Why not launch a mobile studio.

"Coffee Stain has been working with mobile for many years, so it’s a natural development. Coffee Stain are experts at finding and developing great games and how come the mobile game market is underserved from their perspective.

We are absolutely not [looking at blockchain]. We really want to make great games and ensure Coffee Stain has a strong mobile presence

"I think there are many options for mobile products and Coffee Stain’s mobile initiatives, but one thing is certain; we think Coffee Stain is really good at making super fun games that players appreciate, and it’s was a pity we didn’t have a bigger presence in mobile. So I’ve been with the company for two years, the Malmö studio is something I’ve been working specifically towards, and I’m super happy going in this direction."

Old with the new

Coffee Stain’s most recent PC and console successes, such as Valheim, Satisfactory, and Deep Rock Galactic, are not necessarily natural conversations to mobile. But Persson was keen to stress that nothing is being written off at this stage.

"We looked at our games already on mobile, like Goat Simulator: what they would look like if they were free-to-play, how would this model turn into something engaging and fun to play? That’s how it started, looking at existing games and talking about their form in the future, and how Coffee Stain would want it to look in the future.

"We’re looking at different options for some of our games. Adapting them to mobile can be a large or small amount of work to make it fit the platform and still feel fun. I wouldn’t want to go into specific IP because nothing has been announced, and we want our announcements to speak more about our IP vision. But every game, from existing IP and new, has to feel native to the platform. That’s really guiding our choices."

"We like being creative and innovative, and of course it’s important we look at existing IP. But we’re also looking at many different genres for new titles. Many hyper/hybridcasual genres are saturated – there are so many games – but we think there are opportunities in most genres, especially emerging genres.

"We also have FPS games within our IP portfolio that we’re keeping an eye on for options. We’re not excluding anything right now. But we’re also looking at many different genres for new titles: the merging of battle [royale] games and hybrid subgenres is exciting to follow. We also see a lot of movement in horror and survival genres, such as Garena Undawn, with publishers big and small."

The Nordic region – an informal assemblage of countries in northern Europe and the North Atlantic – houses some of the world’s most accomplished games publishers and developers, not least Rovio, King, and Supercell, which remain some of the most authoritative voices in the mobile games industry. But Persson was flexible about the form of Coffee Stain Malmö.

every game, from existing IP and new, has to feel native to the platform. That's really guiding our choices

"We build studios in our particular way. We try to keep studios very small. Team chemistry and how we collaborate works better if we don’t grow too big, and I think that’s especially important in mobile.

"We will build capabilities for publishing and have many mobile projects in development; some will be internal, some external. The size of Malmö is uncertain because the needs might change, but we’re still exploring many different options for new mobile games. We’re aiming for sub-30 people, but everything can change."

Regardless of the size of the team, Persson was committed to headquartering the studio in Malmö, Sweden.

"Malmö historically has always been interested in games. It is a hub for triple-A games and is home to numerous established companies. More importantly, I see the growth of many upstarts that will continue to make Malmö grow within the industry. It’s close to Copenhagen, creating something of a merged area, it’s such a vibrant place to look for talent and create great synergies.

"We also have great education in Malmö, with the Game Assembly [a higher education school based in the World Trade Center Malmö]. The studios I’ve worked with tell me these students quickly become integral and bring a freshness to us old people in old, established studios."

If Persson was definitive about Coffee Stain Malmö’s lack of interest in blockchain, he is decidedly more imprecise with everything else – what IP will it be exploring, what genres will its games occupy, even the expected formation of the studio.

It’s still early days, but it is hard to ignore the wolves at bay – Web3 and blockchain gaming continually promise further disruption and influence, the fallout of Epic vs. Apple has yet to be fully realised, and the shape of the industry following the incredible influx of consolidation since 2020 remains to be seen. Why launch a mobile studio in a volatile, pre-blockchain, post-IDFA world.

"I think we’re just trying to be flexible. There are many moving parts when you want to create games. In the end, we can’t affect many of these – and on the chance we can affect them for the best, we will– but we just have to find solutions as we go forward.

"Ultimately, it’s really important for us to make great games. Not only through innovation but getting the right product feel, substance, and production values to meet our players expectations. We’ll roll with the punches with anything else."