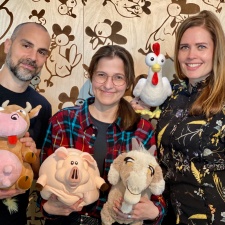 Supercell’s enduring farming hit, Hay Day, was published precisely 10 years ago – June 21 2012, a mere two months prior to the studio’s breakaway title, Clash of Clans. However, despite being consistently overshadowed by its younger sibling, Hay Day has remained a steadfast success for the firm.

Stephan Demirdjian and Camilla Avellar, former Hay Day game lead and designers, respectively, and artist Sari Latvala shared their thoughts on a decade’s lessons and opportunity in keeping Hay Day not only alive but flourishing, and the relative simplicity of mobile games development in the industry’s nascent era.

Part two of this interview is now available through this link.

The earliest Hay Days, and creating games without a content or social pipeline

Stephan Demirdijan: The market was very different – perhaps more blue ocean than it is now. Nowadays, when we launch games, there are so many more considerations than were not as required back in the day. Such as fully-mapped social paths and a strong plan of future features in response to what other games have brought to the market, that weren’t so visible to the early mobile playing audience.

Long story short, making games has become a bigger ask. As the market and the audience matured, so did the complexity and what has become possible with mobile gaming. Those expectations are now tied to new game development, and what you must have ready from the get-go, in order to have the best launch.

Sari Latvala: Back in those days, you spent most of your time thinking about making games that were fun, and less about the structure of monetisation or social interactivity. Nowadays, the different elements to take into account has created a lot of pressure when publishing anything; you almost risk leaving that central importance of fun behind, while you’re thinking of everything else.

The comfort in creating something in an unknown sector

Camilla Avellar: Looking at some dates ahead of this conversation, the Apple App Store had launched just four years before the release of Hay Day, in 2008. No one really knew what the future of mobile gaming would be like: back then, we thought tablets would be the biggest disruptor in mobile gaming, and of course it turned out to be the phone. It was such an interesting time with so many unknowns.

Latvala: We didn’t have anything follow, right? There were no farming game successes, back then-

Back then, we thought tablets would be the biggest disruptor in mobile gaming

Latvala: Yes, of course! Plenty of people were playing farming games on Facebook, but we had to define what our farming game was, without anything equivalent to look at. But that was a good challenge, having to invent every single part of it.

Demirdijan: The team was very aware of the successes other companies were having on Facebook. But there was no farming game available on mobile. I still remember the stories the team had – realising their own spin was the touch controls for simple actions like weeding or sowing crops. That was when the pieces came together, the first point the team started to believe that it was going to work.

Avellar: Yes, this was very much about making a game that was mobile-first.

Demirdijan: The first two years, we were mostly focused on just bringing more content to the game. Because its success took the original team by surprise – and sometimes it still wasn’t enough, because players were able quickly complete the available content very quickly – and we began to focus on the later levels, to ensure there was a backend to the game.

But once we got one step ahead of them, we were in a good spot to think about what Hay Day really required to drive it further. That’s when the word social was really pushed as the key element, and when we incorporates alliances – as Hay Day calls them, neighbourhoods.

Latvala: Adding the social aspect was always on the table, but 2014 was really when we could make it work.

Demirdijan: Following this, we built the derby feature, which gave neighbourhoods a reason to play together collaboratively but also with competition in mind. That was one of the biggest changes and, one of the reasons players have continued playing Hay Day for years.

The footsteps of Clash of Clans’ social focus

Avellar: Before the derby feature, neighbourhoods were just a place to talk and perhaps do some trading. It was very limited.

Demirdijan: Clash of Clans launched with alliances from the get-go. But for Hay Day, our first approach was to create something akin to a single-player experience. But throughout the years, we realised that farming could be a very social experience too. I think that is one of the major lessons throughout Hay Day’s years.

Clash of Clans launched with alliances from the get-go. But for Hay Day, our first approach was to create something akin to a single-player experience

Latvala: The core idea was funny and quirky humour – one element of Hay Day is that nothing bad ever really happens, which is informed by its 1950s-esque art style.

Demirdijan: You mentioned nothing bad happens in Hay Day, and that’s really reflected in some of the in-game depictions – for example, how you collect bacon from pigs via a bespoke pig sauna.

It would have been very easy for the team to go full-cutesiness. But, rightfully so, they chose an appealing but more unusual art style, which is more unique and less interchangeable as other mobile games styles may have been.

Avellar: I remember one of the original artists was adamant he didn’t want to do cute – “I want to draw orcs, and evil!” – so when he was involved with Hay Day, he made sure it wasn’t overly cute.

Retention over monetisation, and creating an enduring title

Demirdijan: The absolute priority – our one metric – is retention. So, I don’t remember ever really strongly thinking about monetisation, especially in the earliest years. If we focused on retention, we felt that if we give our players enough positive reasons to keep playing and create their own habits and play styles, eventually they will feel comfortable spending money on areas they feel are worth spending on.

Avellar: Within four years of launch, we already had a strong sense that our player base was very loyal. We knew, more or less, what they wanted to see in the game and we wanted to continue that trend. I feel we were very successful in that.

The influence of Clash of Clans, and shifting support from Hay Day

But when it came to team resources, we tried to live by this order: Supercell first, team second, individuals third, although it’s not always that black-and-white. We had to think about what was best for the company.

So, if the Clash of Clans team needed support, and Hay Day was where we could reallocate resources, Clash of Clans would be the priority. Sometimes it was painful, but we found ways to balance it out.

Avellar: In general, we had flexibility to ensure Hay Day was never under-resourced. It was never as though our team was sidelined.

Latvala: This was done through strong pre-planning, knowing how many updates we had to make in the year, and having a backup plan if the team was supporting Clash of Clans. A lot of planning ahead.

Demirdijan: Maybe in other companies, in the past, this is different but, specifically, in my role as team lead, I would never describe Supercell as a political company. I never had to worry about being misled – I would sit down with the Clash of Clans lead, and we would create a plan together, for the sake of Supercell, without having to worry about anything hidden in the background or being mindful of keeping my guard up.

It was a case of sitting down for a coffee, discussing our needs, checking our planner, and doing this as casually as possible. It was always a pleasure atmosphere, even when it was challenging.

In the next instalment, Demirdjian, Avellar and Latvala discuss the influence of new genres, including the hypercasual boom, and working on Hay Day during the first of the pandemic years, and its plans moving forward.