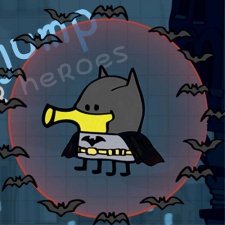 Lima Sky, the developer behind Doodle Jump, has unveiled a deal with Warner Bros. to deliver a F2P Doodle Jump game built around the DC Entertainment Superhero franchises.

The game – Doodle Jump DC Super Heroes – has already been released on iOS with Batman as the lead character, and will be the first of what the companies describe as "two iconic properties".

"We at Lima Sky are thrilled to bring Doodle Jump into the amazing worlds of DC Comics Super Heroes," said Igor Pusenjak, co-founder of Lima Sky.

"We’ve been lifelong fans of the Batman universe and brand."

Though once an App Store superpower, the now almost five year-old Doodle Jump – which claims to the be third best selling paid app of all time - has fallen back in recent years, with its simple accelerometer-based gameplay very much the product of the early years of smartphone development.

For Warner Bros., however, the deal represents an opportunity to "bring the DC Comics brand to such a highly successful and widely approachable mobile game as Doodle Jump."

"We’ve been lifelong fans of the Batman universe and brand."

The first game is built around Doodle Jump's brand of "jump ‘em up" gameplay mixed with Batman and his famous Rogues’ Gallery.

Future updates to the game include other DC Comics’ Super Heroes, including Superman and Wonder Woman, and their nemeses.

The free download will also hit Google Play and Amazon's Appstore in 2015.