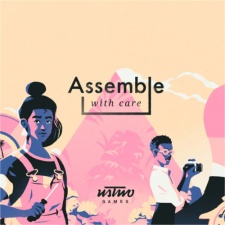 In a video on YouTube, the Monument Valley developer takes you behind the scenes of its new title Assemble With Care.

The game will launch on September 19th on Apple Arcade and will be available on iPad, iPhone, iPod and Apple TV.

Apple's subscription service is also launching September 19th and will cost $4.99 a month.

The game places you as Maria, who repairs and restores broken objects, discovering the stories and relationships behind both the items and the characters.

"This game is about trying to help people understand the position of another person. Fixing the physical with the tools that you understand - but also fixing the emotional.

"The tools that we all struggle with in our day by day basis," said Ustwo Games' chief creative officer Dan Gray.

"As Maria, you're asking a lot of questions about the objects that you're being presented with, How are they broken, were they broken deliberately?

There's always a link between what we're doing as players, how we're interacting with these objects.

"The ways that we can bring them back to life and the actual stories of the characters themselves in the relationships that they're trying to bring back together."