Crash Bandicoot: On the Run will hit mobile devices in Spring 2021

Pre-registrations open on iOS and Android 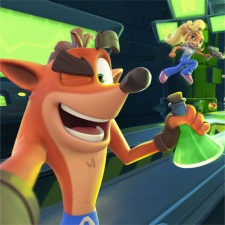 Crash Bandicoot will spin his way onto mobile devices in Spring 2021.

King's upcoming mobile title Crash Bandicoot: On the Run will be available on both iOS and Android devices. The game was officially unveiled in July.

Players can pre-register now to receive an exclusive skin on launch day; the blue hyena appearance that long time fans may recognise from Crash Nitro Kart.

In his latest mobile outing, Crash will treat fans to some classic gameplay while new features such as crafting and base-building will also be added.