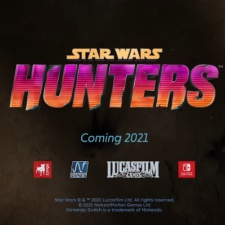 It is the second game to be announced since EA's deal to exclusively produce games with the Star Wars IP ended. Last month, LucasFilm Games teamed up with Ubisoft to work on an open-world Star Wars game. However, this isn't an entirely surprising move; Zynga snapped up the license to make Star Wars mobile titles back in 2018.

“We created Star Wars: Hunters for every fan who has ever dreamed about playing a high-intensity action game set in the Star Wars galaxy and are excited to see Switch players embrace our foray into console gaming.”

Zynga also experienced a record-breaking year for revenue in 2020, grossing $1.97 billion. The company also noted success in its 'Forever Franchises' during its annual report. This included mobile title Harry Potter: Puzzles & Spells, which shot past $40 million in revenue just four months after release.

The company also outlined its multiyear strategy in said report, which included the maintenance of its current live games. This covers its new handful of hypercasual games secured by the recent acquisition of Turkish studio Rollic. Zynga is also set to launch several new titles, one of which is Star Wars: Hunters.

Star Wars: Hunters is set to release on Nintendo Switch and mobile devices later this year.